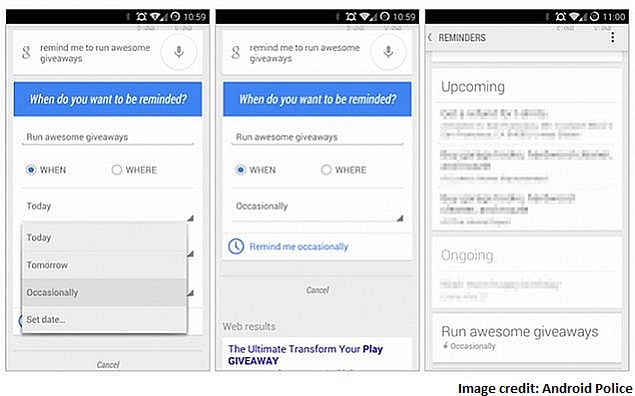 Google has silently added a new reminder feature to Google Now which can now remind you 'Occasionally', instead of at a particular date or time.

With the feature, instead of setting a reminder for a particular time or date, users can now set an occasional reminder that will keep reminding them periodically. Other than the Today and Tomorrow options, users will see a third option Occasionally above the Set date option.

The new Google Now reminder feature seems useful for users who often forget a task that is to be done on a relatively regular basis, though not at a precise, or known time. How the frequency of the reminder is decided is not known.

The reminder is activated when users speaks or types "remind me" followed by a task in Google Now. The feature was first spotted by Android Police. As noted by the website, the cards "will show up at the top of you Google Now stack, and can be dismissed or postponed to another day. " At present, the feature hasn't yet rolled-out to India and availability in other regions is not known either.

Last month, Google had started rolling-out its "Ok Google" hotword detection feature to any Android UI screen, via an update to the Google Search app. This meant just like the Motorola Moto X (Review | Pictures), all the Android 4.1 or higher devices will now be updated to detect the 'Ok Google' voice command from any screen, including the lock screen.

The above feature seems to be rolling-out gradually to individual accounts, so even after the apk is installed, the feature will only be activated by Google on an individual basis. Users can go to Google Now>Settings>Voice >Ok Google hotword detection, and check if the feature is rolled out to them or not.
Comments

How to Download Your Orkut Scraps, Testimonials, and Photos
Torrent and Other Websites Being Blocked by ISPs in India: Reports