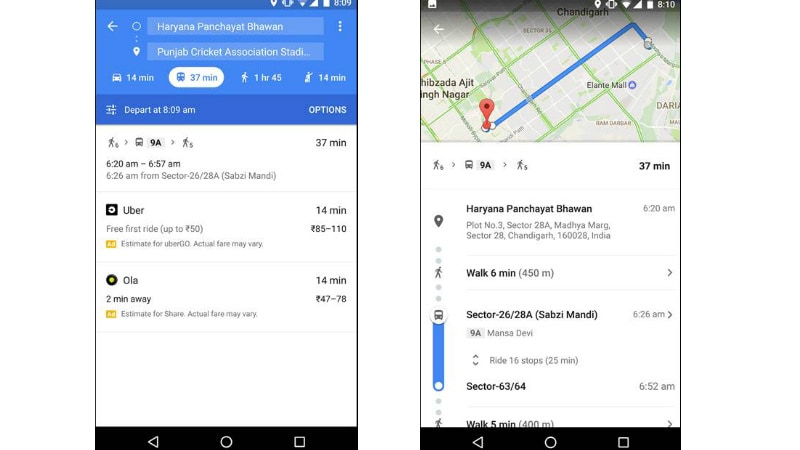 Google Maps has expanded its Transit feature to seven more Indian cities, increasing the horizon for users to understand best public transport services to get from one place to another in the country. The new cities include Chandigarh, Lucknow, Vadodara, Indore, Mysore, Surat and Coimbatore.

The Google Maps Transit feature is available on Android and iOS and lets you find the best bus routes, railway stations, and even shows average Uber and Ola fares to your destination. The transit feature will tell you exactly how much you need to walk to a bus stop, arrival and departure times, and even where to change buses. You can find the feature by entering the destination and tapping the 'Transit' (the little tram) icon.

How Google Maps Can Be Improved in India

For example, if you're going to Sukhna Lake in Chandigarh, just search for Sukhna Lake and Google Maps will show you how to get there from your current location with bus routes and bus changes. With the addition of these seven cities, Google Maps Transit feature is now active in sixteen Indian cities including Delhi, Mumbai, Bengaluru, Chennai, Kolkata, Jaipur, Hyderabad, Pune, and Ahmedabad.

Speaking about the expansion of the Transit feature, Sanket Gupta, Product Manager, Google Maps, said in a statement, "Google Maps is your guide to the world around you, and this launch is part of our effort to reflect the real world and provide you with relevant information about your surroundings."

In December, Google Maps even started showing people information about public toilets near them in Delhi-NCR and Madhya Pradesh.