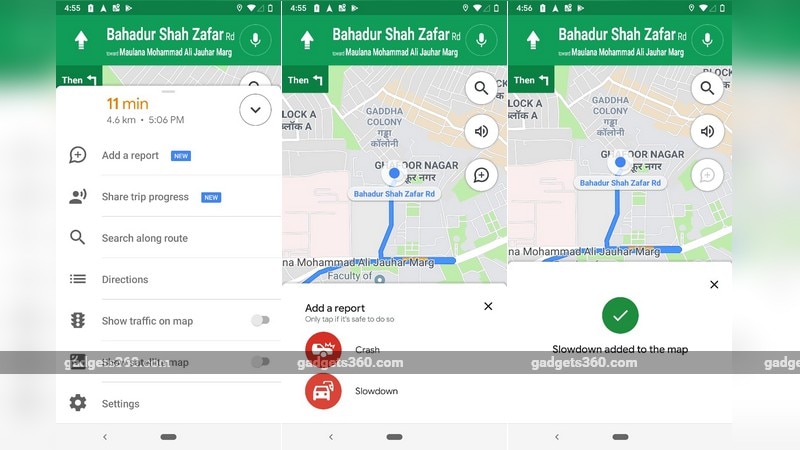 Google Maps on Android has received a new feature that will allow users to report traffic slowdown in an area on the map. This is part of the navigation app's recently added reporting feature which allows commuters to report speed traps and accidents while navigating to their destination. Users can now see the new ‘Slowdown' option on the incident reporting page in Google Maps for Android, however, it is not known whether the feature has been rolled out for the app's iOS version or not.

The reporting feature in Google Maps went live last month, adding two options that will let users report speed traps and accidents like a car crash. The feature can be accessed when the navigation mode is on. With the addition of the slowdown options, one can now report if there is slow traffic or congestion in a particular area. The slowdown reporting tool was first spotted by 9to5Google. We tested the feature in the Google Maps app for Android (v10.12.1) and found that it works just fine.

In order to use the feature, one has to switch to navigation mode and tap on the circular ‘arrow up' button. This will open a slide out menu where users can find the ‘Add a report' option. Tapping on it will open the reporting tools including the slowdown button. But it appears that the slowdown feature will appear differently based on the language settings of the device.

Android Police reports that users who have set the language to English (UK) will see ‘Congestion' on the reporting screen instead of ‘Slowdown', with the latter appearing when the language preference has been set to English (US). The slowdown option in Google Maps app for Android is now live for users in India, but there is no word on its availability in the app's iOS version.