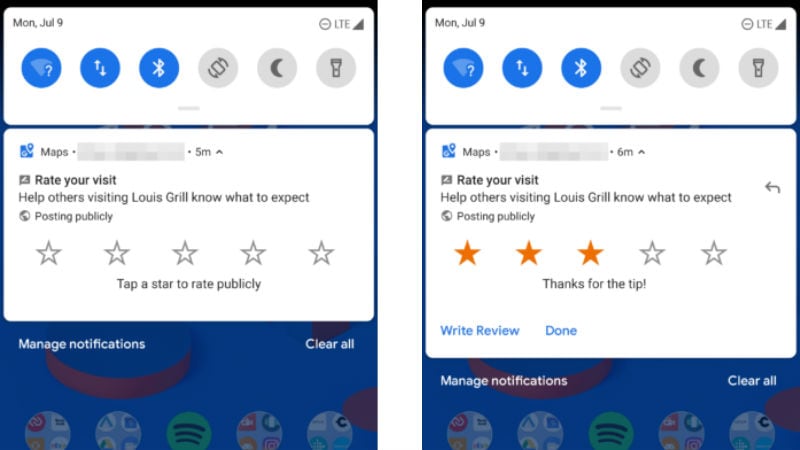 In May 2018, Google Maps received a number of new updates at the company's I/O 2018 annual developer conference. Ever since then, Google has been rolling out several of these features, including Quick Action buttons, a For You tab, a redesigned Explore tab and more. Also, Uber integration was removed from the Android and iOS apps. But now, it appears that the Google Maps team is bringing some changes to the Android notifications. There have been many updates to the Notifications feature for Google Maps over the years, but now, users will now be able to directly rate a place using the notification menu.

First reported by Android Police, the star rating system that usually comes inside the app, is now displayed right in the notification. You can now quickly select one of them to submit. Until now, when Google Maps suggests users to rate and review places that they have visited, the users were required to tap the notification to open the Google Maps. Further, the users were asked to add more details to the reviews. While you can still go inside the app to write a full review of the place, the option will be absent from the drop-down notification. We were able to independently verify the existence of this feature.

On the one hand, this is a good move by Google for users who do not want to write a detailed review of every place they go to, this could also lead to a huge number of thoughtless ratings that do not offer any explanation. However, the report says that the notification is not expanded by default, meaning the quick rating system may not be used as much.

While the new feature was spotted in the Google Maps app for Android a few days ago, there is no clarity about when Google will start rolling it out for all users.