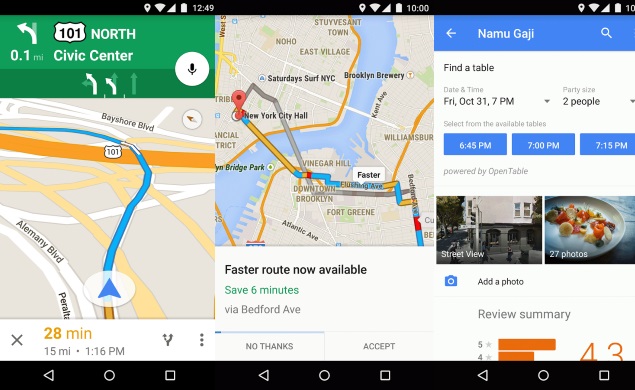 Google has updated its Maps app for Android adding another useful feature that will warn users if they are navigating to a place that will already be closed at the estimated time of arrival. The feature can come handy in situations where we search for a nearby destination and end up reaching the place only to see it is closed.

The updated Google Maps is now available to download from Google Play. With this update, users will be able to see car rental reservations from the connected Gmail account, in addition to flights and hotels. The update also brings bug fixes.

The car rental reservations feature was first spotted earlier this month alongside other expected features such as new Photo Gallery viewer.

Users received a slightly revamped interface that allowed users to know at a glance at how long they will have to wait, and alternative options. The new Google Maps' real-time transit info however was initially being rolled out to six regions, and would give live arrival timings of buses, trains, and subway systems. The feature would help users know when the next bus or metro would arrive in case they missed the previous one, and, also sends alerts for cancelled routes. Google brought on board over 25 new partners in the UK, the Netherlands, Budapest, Chicago, San Francisco, and Seattle for the initial rollout of real-time transit info, in addition to the over 100 partners it already has worldwide.