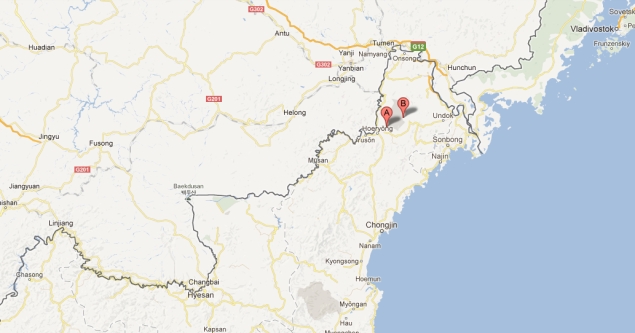 North Korea may be the world's most shrouded country, but on Tuesday Google Maps lifted the veil just a little, uploading a map of the police state complete with street names in the capital.

The new map, built with the help of what Google called "a community of citizen cartographers," provides people who normally visit the site for driving directions with a peek at places they previously may only have read about, probably in articles about the North's nuclear program or its devastating food shortages. The map of Pyongyang, the capital, shows all sorts of landmarks the tower that celebrates the country's self-reliance doctrine of Juche and Kim Il Sung Square, where military parades are held - as well as hotels, schools and hospitals.

Users can zoom in and even post comments and photos the map also includes what the site suggests are four of the country's enormous gulags, marked as gray splotches. The map is still empty in many areas of the country, but is much more detailed that the one that was on the site until Tuesday, which was mostly blank.

In a sign of just how hermetic the country is, Google said North Korea was the last country in the world to get a detailed map.

While North Korea experts point out that other more sophisticated maps exist, and that Google Earth provides a satellite image that includes major cities and sites, some suggest that the easily accessible Google Maps will probably draw more casual viewers.

Even Curtis Melvin, who has created what many consider the most definitive public online map (on a Johns Hopkins University site), said Google Maps has "provided the umph to get more eyes focused on the issue. North Korea is a serious policy, humanitarian and security challenge, and the more information we have, the better."

The posting of the map - and Google's call for still more mapping information on the North from netizens - focused new attention on the North at a time when the country is locked in a tense standoff with the United States and its allies over tightened sanctions and has promised a third nuclear test.

Google's initiative also came three weeks after its executive chairman, Eric E. Schmidt, visited Pyongyang in a highly publicized yet controversial trip organized by Bill Richardson, the former governor of New Mexico. Schmidt, who likes to describe the Web as the enemy of despots, said he urged North Korean officials he met in Pyongyang to let more North Koreans use the Internet.

Google said Tuesday that the posting of the map project was unrelated to Schmidt's visit, which the company says was a personal trip.

"In the case of Google Maps for North Korea, there was little public information, and the crowdsourcing is from people from North Korea who are elsewhere," Schmidt said in an email. "It sheds a bit more light on what is happening in this remote country."

There was no immediate North Korean reaction to Google's announcement Tuesday.

Google Maps is unlikely to provide important new information to policy makers who already have satellite maps from years of surveillance, nor will it get much of a following in the North itself, where the secretive leaders allow Internet access to only the elite, who are closely watched.

But the crowd-sourcing project provides a tool for Internet users anywhere in the world to help identify at least some features in the isolated country that the regime in Pyongyang does not want the world to know. (The regime cherishes secrecy to such an extent that its propagandists liked to boast: "When our enemies try to peek into our republic, they only see a fog.")

Citing privacy concerns, Google would not say how many contributors there were to the new map or who they were, but experts expect future postings to include those from the thousands who have fled North Korea in recent years.

Already, critics of the North's authoritarian government and the backward economic policies that keep its people starving were posting sardonic comments by clicking on the "review" link often reserved for rating mapped businesses, restaurants and tourist sites.

One reviewer wrote, regarding bronze statues in Pyongyang of Kim, the country's founder, and his son: "Wow, the Korean people must really have loved it under Kim Il Sung, to think they raised this gigantic statue voluntarily on their spare time while they was gloriously lacking food and metal for basic agricultural equipment."