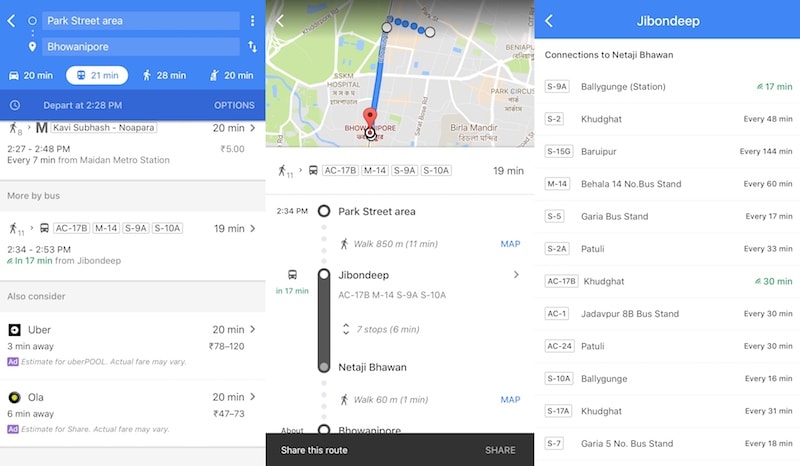 The new Google Transit feature, for which Google has partnered with West Bengal Transport Corporation (WBTC), will enable people in Kolkata to get real-time updated information for key WBTC transit routes, the company said, adding it intends to include other routes in the future. No word on how soon can we expect Maps to include real-time bus information of other regions in India, however.

Commuters in Kolkata will be able to get information such as when a bus to their desired destination will arrive at their stop, and how long the commute could take. People will also be able to check the arrival time for the next bus The new feature is available on both Android and iOS apps of Google Maps, and users can also find such information through a search on Google if they looked up for a particular bus stop, and tapped on the name and the listed bus numbers.

To utlise the new Google Maps feature, users in Kolkata will need follow these steps:

Google adds that tapping a recommended route lets you view more information on the route's stops, while tapping the bus stop to see a listing of all arriving buses, where relevant real-time info is depicted by the green beacon.

"By sharing the real-time transit information of our buses with Google Maps, we are striving to deliver an enhanced level of service for our commuters. We are confident that the practical use of this technology will facilitate better trip planning resulting in greater convenience to commuters. We expect this to help increase the footfall in our buses and improve revenue realisation," Narayan Swaroop Nigam, IAS, Managing Director, WBTC said in a prepared statement.

"This is yet another attempt to bring smart public transport to Kolkata and to improve the performance of WBTC. We are committed to improve public transport." said Sri Subhendu Adhikari, Minister In Charge Transport Department, Government of West Bengal.

This Startup Wants to Replace Your Office With 3D Holograms