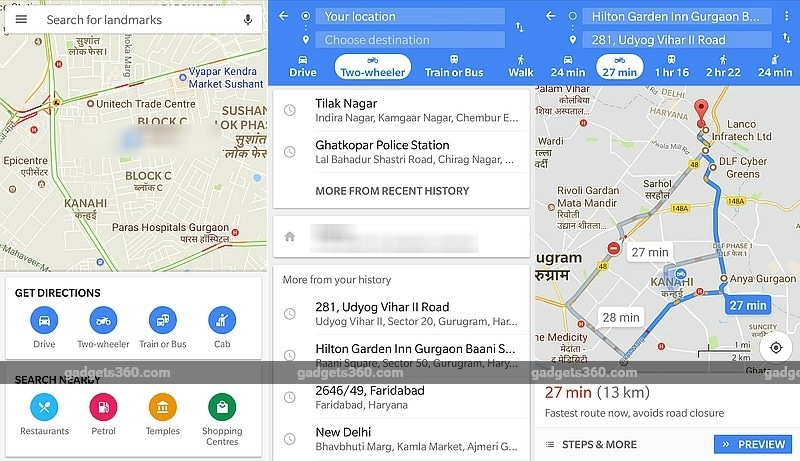 The Indian market has been a major area of focus for Google, and the company has unveiled a new feature for Google Maps in the country. While earlier in the day, Google Maps (v9.67.1) for Android was spotted with a Two-wheeler mode, Google announced the feature at its Google for India event. The new mode is seen placed alongside the earlier alternatives – Car, Foot, and Train. We're seeing the new mode on the latest version of the Android app.

The new Two-wheeler mode in Google Maps features customised routing and voice-guided navigation, apart from enhanced landmark navigation. It has has been incorporated to help bikers in the country find the route most suitable for their vehicles. It is an "India-first feature."

Launching such a product in India makes sense as a substantial chunk of the country’s workforce travels on motorbikes and there are quite a few routes that are not wide enough for a bigger vehicle to fit in. Google at its event in New Delhi said India was the largest two-wheeler market in the world, with 70 percent of all registered vehicles in India being two-wheelers - which is why the feature is being launched first in the country.

Previously, some riders used to utilise a combination of walking and driving directions to get a route optimised for bikes. Now, with the special two-wheeler mode, Google is using machine learning to accurately predict speed and routes for such vehicles.

It's evident Google has a big focus on India. Google CEO Sundar Pichai's recently commented about India playing an important role in improving Google Maps and other Google products. At the Google for India event, Google also revealed that Maps has seen a 2x user growth in India in the past year.

The mode is fairly intuitive, and informs bikers about all possible road closures along the way. It also gives information about the parking situation at their destination, a handy feature that was previously seen in the car mode.

Netflix's Expensive Sci-Fi Original Altered Carbon Gets First Teaser Trailer
Dead Rising 4 Is Finally Out on PS4, but Should You Buy It?