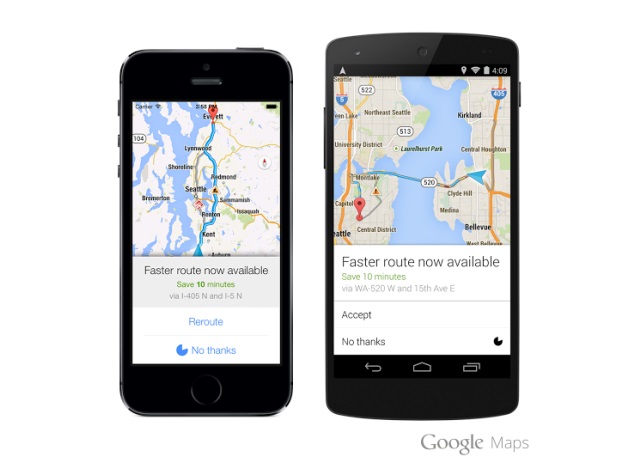 In an effort to tailor its Maps offering to the requirements of individuals, Google has announced a new update for Google Maps which will now notify iOS users if a faster route is available.

The Mountain View giant confirmed the news on its Google+ page and said, "Outsmart traffic and save time on the road- #GoogleMaps will notify you if there's a faster route."

The Google+ page further reads "Now on iPhone and Android, where navigation is available". It's worth pointing out that Google rolled out the current update to Android platform last month.

The faster route feature notifies users if it finds a faster route than the current one available. Two options, 'Re-route' or 'No Thanks', are provided when a user is running Navigation mode of the app.

Recently, Google had to apologise after a major square in Berlin regained its Nazi-era name "Adolf Hitler" on its popular online Maps page for a few hours.

In December last year, Google updated its Google Maps service with a feature that allowed users to build their own Street View map of a location, by using Android photo sphere or a DSLR.

As per Google, users could now take the help of a new feature in Views community to connect their photo spheres to create a 360 degree virtual tour of a place and share them on Google Maps. Much like the Street View, users can embed the interactive viewer on their website or create apps with it using the Google Maps API.

Prior to this, Google Maps was updated with new features and tools based on feedback from its users, namely: directions for multiple destinations; displaying relevant itinerary data within maps itself, and displaying upcoming events data for venues.