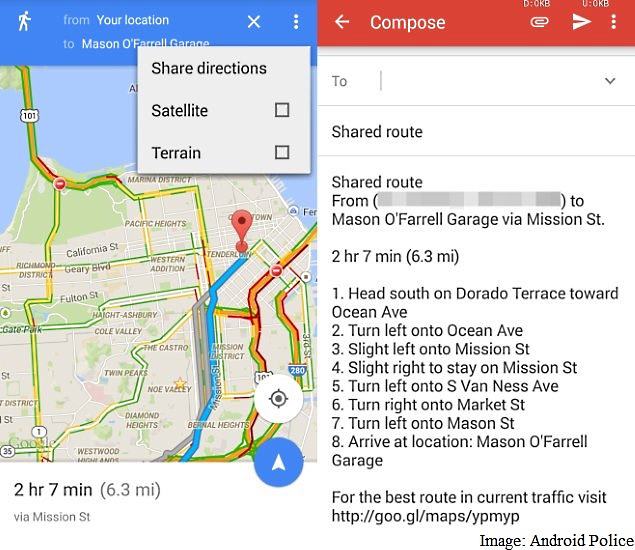 Starting with the updated Google Maps for Android app, which has been bumped up to version 9.3, users can now share directions (via SMS/ email) as a list of instructions from the app menu, alongside a link to view the best route in current traffic (see above). The updated app also comes with new permissions such as access to Bluetooth settings and devices, and the ability to run at startup. Lastly, users can permanently disable the GPS location settings warning box in the updated app.

While Google Maps for Android seems to be rolling out gradually like always (it is not yet listed in India), the iOS app on the other hand has been updated to version 4.2.0 on Thursday.

Just like the Android app version 9.2.0, Google Maps for iOS v4.2.0 also includes a new filter searches for restaurants by cuisine type. Additionally, the iOS app has some new features like the added ability to include public transport directions in calendar, see current weather information for cities around the world, and the ability to drop pins on a map for starting and destination points in directions and navigation.

Meanwhile, the Android Police team has performed its usual apk teardown of the latest Google Maps for Android app, alongside providing the Google-signed apk for users to sideload. The report points out a new set of strings related to getting location-specific contextual notifications, such as nearby "transit stations, airports, restaurants, and stores." While these can be rolled out in future iterations of Google Maps, these are notably similar features already present in Google Now.
Comments