Google Maps for iOS Gets Bottom Bar With Place, Traffic, and Transit Info 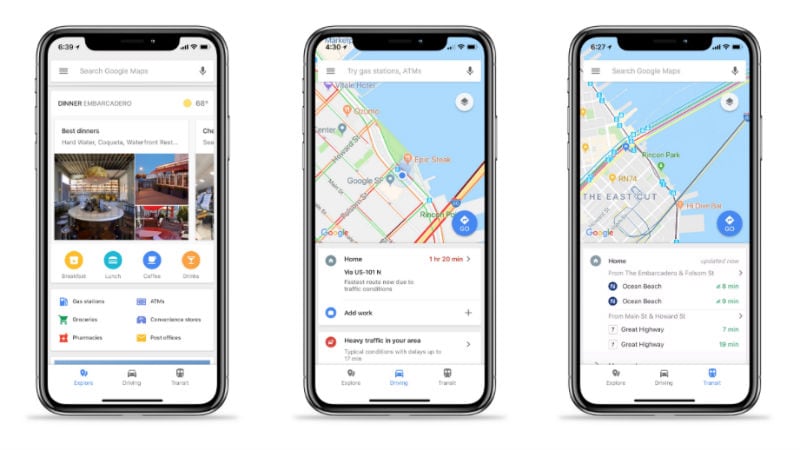 Google Maps app for iOS, in its latest update, will provide users with easier access to some useful commuting features. With the update, three tabs - Explore, Driving, and Transit - are accessible from a bottom bar within the app. Google says that the real-time information from these bottom bar navigation tabs will help users in finding a nearby restaurant, beating the traffic, or catching the next bus.

The Google Maps app for Android had first received the feature, around the same time, a year ago. And now, it is arriving on the iOS platform. The new tabs will showcase information on nearby ATMs, restaurants, traffic times for commuting, and updated train schedules, and similar things. For instance, with a quick swipe up from the Explore tab, users will be able to find places to eat or drink with curated lists like 'best dinners', etc, Google says.

As for the other two tabs on Google Maps for iOS, Transit will help commuters to take public transport. Users will receive suggestions on trains and buses, as well as provide ETA to a workplace or home. All you need to do is swipe down to check out timings when you head out somewhere.

Meanwhile, in the Driving tab, users will be able to see real-time ETAs to places that they have saved as 'work', 'home', etc. Also, Google Maps will provide traffic conditions in nearby places and estimated delays on the specific route. "If you don't need turn-by-turn directions but want real-time traffic info as you take your usual route, you can tap on "start driving" to go directly into driving mode," Google had earlier detailed in the update to Maps for Android.

While Google Maps had become quite organised last year, the options were a little scattered in the iOS app. Additionally, the new design comes with a cleaner interface.

If you are a Google Maps users on iOS devices and you need an easy-to-use feature for your commute needs, the updated app is available for download on the App Store.