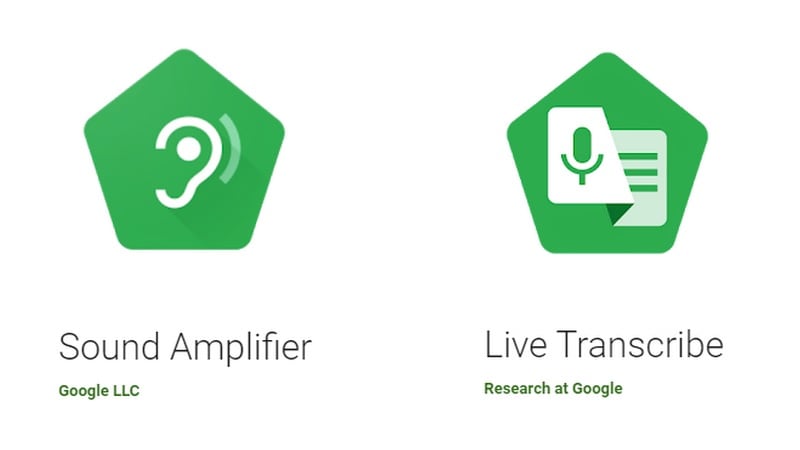 Google has introduced two new assistive apps for people suffering from varied levels of hearing impairment, with the goal of helping them participate in a conversation using their smartphone and also reducing their reliance on hearing aids. The two new apps are Live Transcribe and Sound Amplifier, and both of them are currently available for the Android smartphone users. The Live Transcribe app is a transcription tool for people with severe hearing impairment, whereas the Sound Amplifier app enhances the volume and clarity of sound and is aimed at people with partial hearing impairment.

As for the status of Google's new assistive apps, the Sound Amplifier is now available as a stable app from the Google Play Store while Live Transcribe is currently under early access and can be downloaded by people who seek to test it out and participate in further refining it. Talking about the core functionality of the new apps, the Live Transcribe is for deaf or people with severe hearing impairment and employs an advanced speech recognition technology to convert speech into text in real time.

The Live Transcribe app supports over 70 languages and dialects. Google claims that all transcribed conversations are stored on the smartphone itself and not on Google's servers, implying that users won't have to be concerned about the privacy aspect. Live Transcribe can also facilitate bilingual conversations and also has haptic feedback support to alert users.

The app is compatible with all Android devices running Android Lollipop or later and has been developed in collaboration with Gallaudet University, an esteemed institution for hearing impairment research. The app's live transcription feature comes inbuilt on the Google Pixel 3 and can be activated by enabling the ‘Live Transcript' toggle in the accessibility settings. The app is now available to download as a beta from the Play Store and the app's Android accessibility page.

The second assistive app introduced by Google is Sound Amplifier, which as the name suggests, amplifies the sound output to help people suffering from partial hearing loss. Aside from amplifying the audio signal, the app also allows users to tweak the left and right headphone settings, adjust the intensity of audio boost, fine-tune the quality, and control noise reduction. Sound Amplifier is just 3.1MB in size and can now be downloaded from the Play Store. Once the app has been downloaded, its functionality can be activated by going to Settings > Accessibility > Sound Amplifier > Use Service.