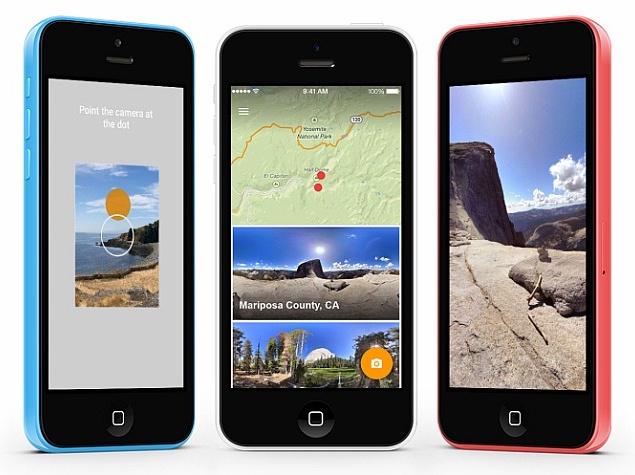 Google on Tuesday released its Photo Sphere Camera app for iPhone and iPad devices. The 360-degree photo capturing Photo Sphere feature made its debut in Google Nexus 4 stock camera app, and was recently made available for non-Nexus Android devices (running Android 4.4 KitKat or higher) as the Google Camera app.

The standalone Photo Sphere Camera app for iOS has been optimised for iPhone 5 and can be installed on iPhone and iPad devices running iOS 7 or later, except the iPhone 4. On the App Store listing page, Google notes that "the iPhone 4 cannot create photo spheres."

The new iOS app lets users create a 360-degree panoramic image around an axis. Users will be guided with a dot as they start to capture a Photo Sphere image. Once a user aligns the dot and circle together in the Photo Sphere Camera app, it automatically clicks the image and keeps on stapling them together. The final render of the stapled images results in a sphere. Although the Photo Sphere Camera app is pretty easy to use, users can also see an instructional video by Google for more details.

Once a photo sphere image is created users can either publish it to the Google Maps Views section via the Photo Sphere Camera app, or, share it via email, messaging or social networks.

In April, Google had released a camera app for non-Nexus Android devices (running Android 4.4 KitKat or higher), dubbed Google Camera. The highlight of the Google Camera app was the Lens Blur mode (apart from Panorama and Photo Spheres), which claimed to give SLR-like image results with shallow depth of field. After clicking a shot, users can even change the subject in focus.