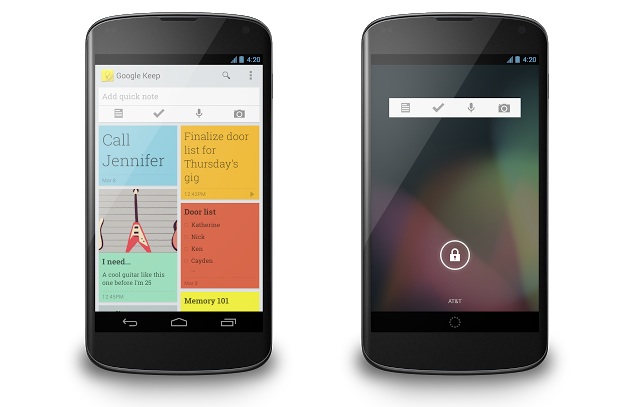 After a little peek-a-boo, Google has officially launched Keep, its note-taking service and app that lets users key-in quick notes and lists, and also attach pictures with them. The service is available online on Drive.google.com/keep and as an app for devices running Android 4.0 (Ice Cream Sandwich) and above. The service will be integrated with Google Drive and users will be able to create and edit notes and lists directly through Drive in the coming weeks.

The Keep Android app also allows users to take pictures via the device's camera and save them as notes, in addition to enabling them to speak and convert voice memos to text. It offers a lock screen widget allowing users to quickly create notes even when the phone is locked on devices running the latest version - 4.2 of Android Jelly Bean OS.

The app has a rather simple interface with controls to add quick text notes, lists, voice notes and capture images. It allows users to organise and browse notes in multi-column and single-column view, share notes via the Android share menu and archive them.
Notes created by the user sync almost realtime across the web and app interface, and can be edited and organised at both places. The service also lets users colour code the notes.

The service had made an appearance two days back on Google Drive only to disappear within half an hour. With the service, it looks like Google intends to challenge Evernote, the popular cross-platform cloud based notes taking service. While Google has the advantage of integrating the service closely with its ecosystem incentivising users who're already latched on to it, we're not sure if everyone would brace it with open arms, looking at the recent demise of Google Reader.

What's in this version:
• Create notes, lists, and audio notes
• Add photos to any note
• Hide and show checkboxes to turn notes into checkable lists
• View and create notes from homescreen and lockscreen widgets (lockscreen widgets require Android 4.2+)
• Selectable color for notes
• Safely sync notes to Google Drive and other devices
• Notes can also be used from http://drive.google.com/keep
Comments