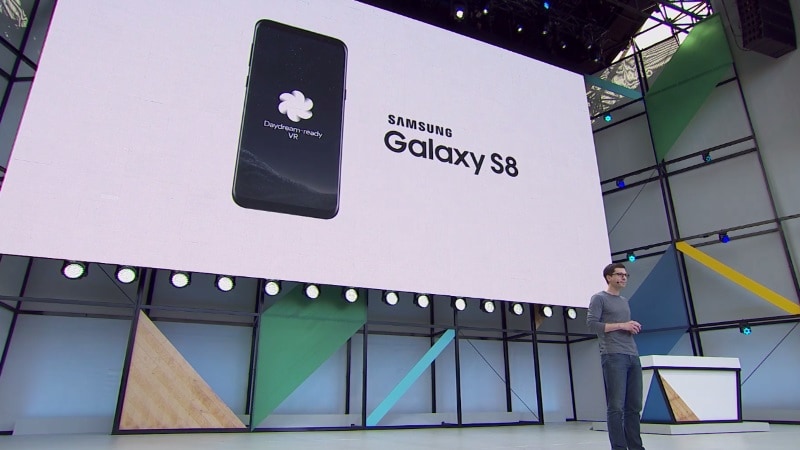 When Samsung Galaxy S8 and Galaxy S8+ were announced in March, it came as bit of a surprise that the top-end Android smartphones didn't feature support for Google's Daydream platform. However, this surprising omission will not stay for long as the search giant announced on Wednesday at its I/O 2017 conference that the support for Google Daydream virtual-reality platform will be coming to the Galaxy S8 and Galaxy S8+ this Summer.

Google announced that Samsung Galaxy S8 and Galaxy S8+ will be getting the Daydream VR platform support with an over-the-air update later this year. Clay Bavor, Vice-President of Augmented and Virtual Reality at Google, announced at the event that the platform has seen "great momentum" in the first six months.

Additionally, the company announced that LG's next flagship smartphone, expected to be LG V30, will come with support for Daydream VR platform as well.

Notably, the Galaxy S8 and Galaxy S8+ smartphones come with support for Samsung's own Gear VR headset powered by Oculus and earlier there was a speculation that in order to promote the use of Gear VR, the South Korean company might be opting out of support for Daydream altogether. Addition of Daydream support means that Galaxy S8 and Galaxy S8+ users will have options for VR just like the phones offer options in digital assistants, i.e. Google Assistant and Bixby.

The search giant additionally announced that it is working with partners including HTC Vive and Lenovo to develop standalone VR headsets that will be released in the "coming months" and feature search giant's 'WorldSense' tracking tech, based the company's Tango platform.