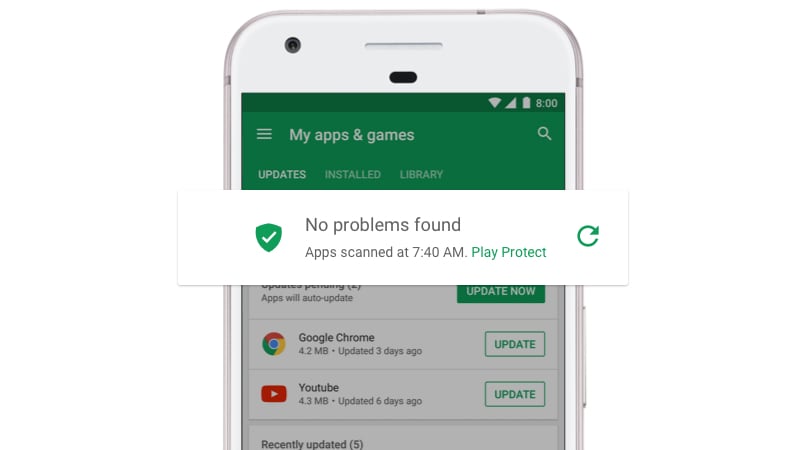 At Google I/O, the tech giant touched upon a lot of things, but the big highlights were Android O public beta, Android Go for entry-level devices, and the arrival of Google Assistant on the iPhone. Alongside, Google also announced Google Play Protect – a malware scanning feature that claims to notch up device security. There’s also the new Find My Device app which is nothing but an overhauled version of the Android Device Manager.

2 billion monthly active devices run on Android today, and the rise of malware attacks really puts security as a priority for this open-source software. This is where Google Play Protect comes in with its security features. It will scan apps daily, and notify you when a specific app behaves abnormally, or is unsafe. It’s essentially a rebranded version of the normal scan behaviour existing on Android devices today, and Google has given it a more prominent branding.

Google Play Protect will be available for all devices with access to Google Play, the company said in a blog post, “Play Protect is built into every device with Google Play, is always updating, and automatically takes action to keep your data and device safe, so you don’t have to lift a finger.”

While the scan will happen automatically in the background, you can also manually scan your device for any risks from Google Play easily. Google Play Protect will roll out to all devices with Google Play in the coming weeks.

Google claims that Google Play Protect will scan up to 50 billion apps a day, look for risks, identify potentially harmful apps, and keep them off your device or remove them. “All Google Play apps go through a rigorous security analysis even before they’re published on the Play Store—and Play Protect warns you about bad apps that are downloaded from other sources too. Play Protect watches out for any app that might step out of line on your device, keeping you and every other Android user safe,” Google explains in its blog.

Google has also rebranded Android Device Manager, and is now calling it Find My Device - similar to Apple's Find My iPhone service. The interface is very different from Android Device Manager, and it shows all your devices on the top, for easy switching. It still does all the same things like locating the device, ringing it, locking it and even erasing it completely. This app works for Android smartphones, tablets, and even smartwatches. The Find My Device app is already live on Google Play as a free download, and can be accessed through a browser as well.