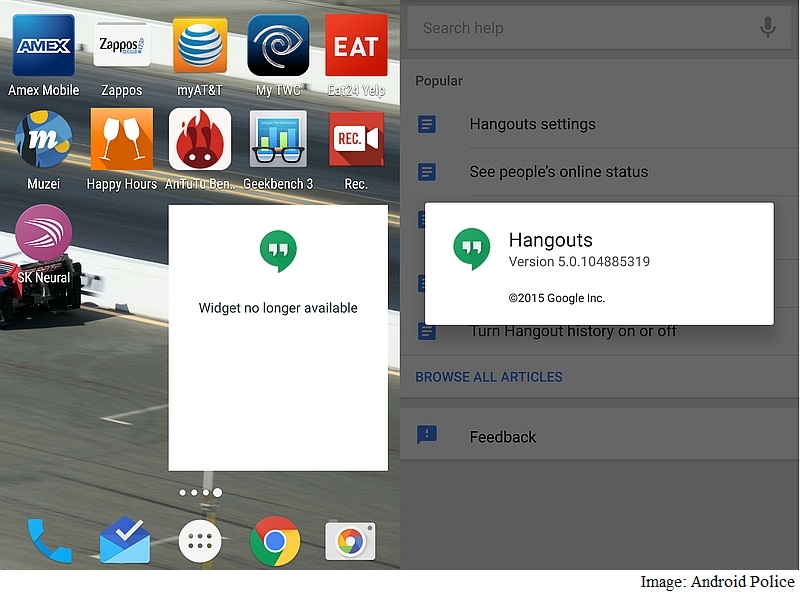 Google has started rolling out the Hangouts version 5.0 to Android users. While the search giant has not provided the official changelog, reports have revealed a list of changes seen in the new version.

The search giant has started rolling out the Hangouts app via Google Play. The version however, is yet to reach India. For those who don't want to wait for the update to rollout to them, they can download and sideload the Google-signed Hangouts 5.0 apk file provided via APK Mirror.

The latest version of Hangouts, as per Phandroid's Derek Ross, brings improvements in the overall performance, adds a fix for broken gif images, and comes with a splash screen. He says the lag witnessed while sending a message, loading a conversation, main screen conversation update, have now been removed. The pop-up showing the 'signed in as' details while opening the app, now shows up with white background instead of black. Besides bringing full working gifs, the app update also removes the Dogfood icon.

Android Police, however, adds that most of the updates are for under-the-hood performance. Besides slight changes in animation, the Hangouts v5.0 now features checkboxes with brighter shade of green. Also noticed is that the 'signed in as' pop-up would not appear at all if user only has one Hangouts account in the particular Android device.

User reports suggest the Hangouts 5.0 to additionally retire the Hangouts 3x3 widget, as it shows "Widget no longer available." Also, users can compose MMS messages for Google Voice users in the app. Before v5.0, the particular option was available only for regular phone numbers. The Google Voice users were previously only able to receive and respond to such messages but were not able to start them.