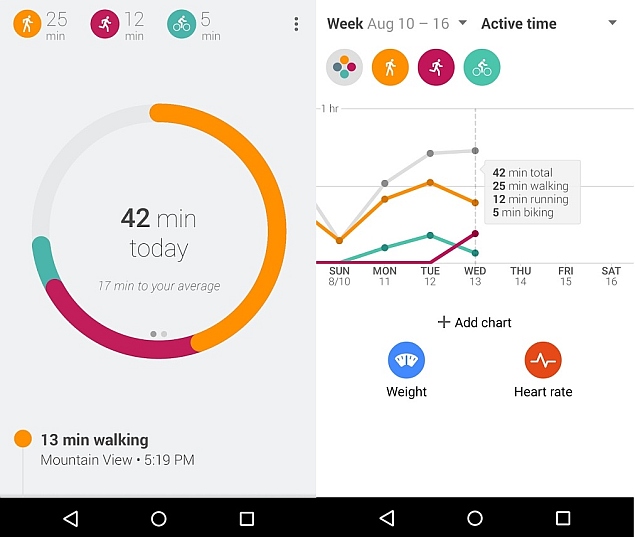 Google on Tuesday launched its unified fitness tracking app for Android, called Google Fit - the same name as its health platform that provides APIs to developers and manufacturers to be able to create apps and devices that can utilise all the health and fitness data onboard, even that gathered by other apps.

The Google Fit app can be considered the Android counterpart of Apple's Health app on iOS 8, which uses the HealthKit platform. The app is compatible with devices running Android 4.0 and later versions and is available to download from the Google Play Store.

The app will link with the user's Google account and function as a central dashboard for tracking the user's fitness activities. The Google Fit app uses the sensors onboard the Android device to track the number of steps walked by the user, weight history, calories burned and other health-related data. Users can also add exercise activities like cycling and running, and set activity goals. Google hasn't detailed which sensors are required on the device to support which tracking functions.

Third-party devices and apps would also be able to connect to Google Fit, and Android Wear support is included, apart from a broad range of health trackers. Users will also be able to access their health data via their Google account on the Web.

Google has also released the full version of the Google Fit SDK, saying it is available on Android, Android Wear and the Web. Google in August made its Fit platform available as a preview SDK (software development kit) to help developers build health and fitness apps for the health-tracking platform. The firm also detailed three sets of APIs - Sensor API, Recording API, and History API, designed to meet specific developer needs.

The Mountain View giant also announced partnerships with companies such as Nike, Adidas, Runkeeper, HTC, Asus, LG and Motorola for the Google Fit platform. The search engine giant unveiled the Google Fit platform at the I/O event earlier this year. Notably, Android's HealthKit rival was announced as one of the key features during the company's WWDC event in June along with iOS 8.