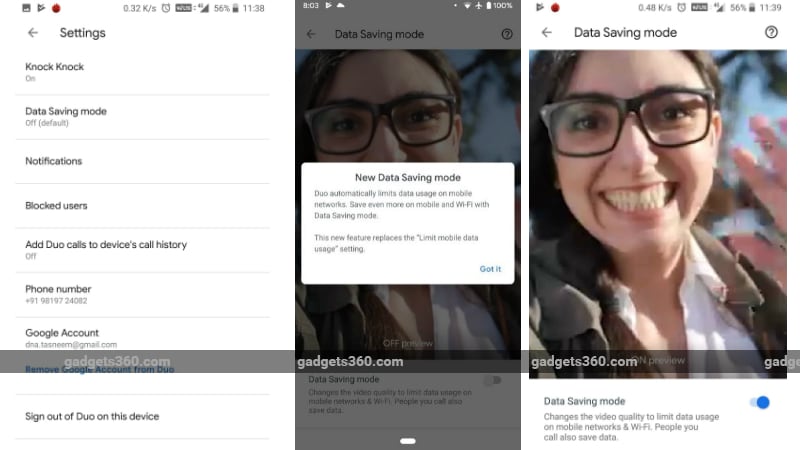 Google Duo is now rolling out its Data Saver feature to a few users in Android. The Data Saving Mode was spotted in APK a few months ago, and now it's reportedly rolling out to a few users on Android. The mode can be accessed in Settings, and can be switched on with a simple toggle flick. This new mode, when switched on, reduces the video quality to save precious mobile data. Google Duo was recently expanded to the Web allowing both video and audio calls.

The new Data Saving Mode is rolling out to Android users globally. 9to5Google first spotted it and it reports that users on Google Duo v50 and v51 both are seeing the feature. The tech giant is rolling it out via a server side update. The feature, after updating to v51, is showing up for us as well.

When switching on the Data Saving Mode, a message displays, “Duo automatically limits data usage on mobile networks. Save even more on mobile and Wi-Fi with Data Saving Mode. This new feature replaces the ‘Limit mobile data usage' setting.” There's no word on when this new toggle switch plans to roll out for iPhone users.

As mentioned, the new Data Saving Mode in Google Duo will change the video quality to save mobile data. Both the caller and the person they're calling will be able to save data during video calls in the new mode. Head over to Settings to see if you can find the Data Saver toggle switch.

What Is My UAN: Simple Steps to Find Your UAN
Android Q Beta 2 Gets a Patch That Fixes Issue Causing Apps to Crash on Startup