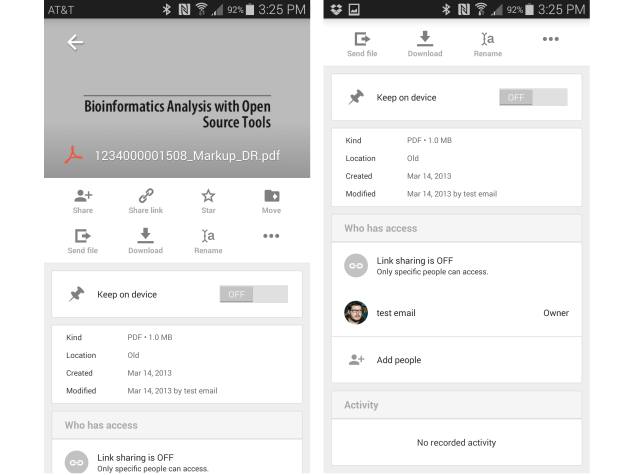 Google on Thursday has reportedly released another update (version 2.0.222.39) to its Google Drive app for Android, with a brand-new UI on offer. Last week, the Drive app for Android users was updated to version 1.3.222.29, bringing numerous bug fixes, performance improvements, and UI tweaks. That update is now rolled-out to Android users in India on Wednesday, and we expect the latest to arriving in the coming days.

As reported by website Android Police, which has a Google-signed apk of the updated app, the new interface of Google Drive completely ditches the top bar, and now there are buttons in a grid form for easy access when a user taps on a file. Options like Rename, Share, Star a document, Share a link, Move, Send file, Download and more, sit just below the file name.

The Google Drive 2.0 app also has a new header for tracking activity on a document. This will make performing tasks very easy for the users. Other options include printing, link sharing, and adding people to the access list. It seems the update will roll-out gradually just like the other updates from Google, and till then users who cannot wait can download the apk via Android Police.

For the existing update on Google Play, along with 'bug fixes and performance improvements', there are some changes that have been rolled out secretly in the Google Drive app. Notably it has added a new floating shortcut bar at the bottom of the screen with Upload, Create and Scan options. The Google-coloured refresh animation has changed from plain blue. Google Drive's multi-user switcher now expands in-line instead of opening a drop-down menu, and the Settings menu now includes Program Policies below 'Open source licenses'.
Comments

Amazon Appstore Offering $100 Worth of Android Apps for Free Till June 28
HP to Settle Suits Over Autonomy Deal; Make Claim Against Ex-CEO Lynch