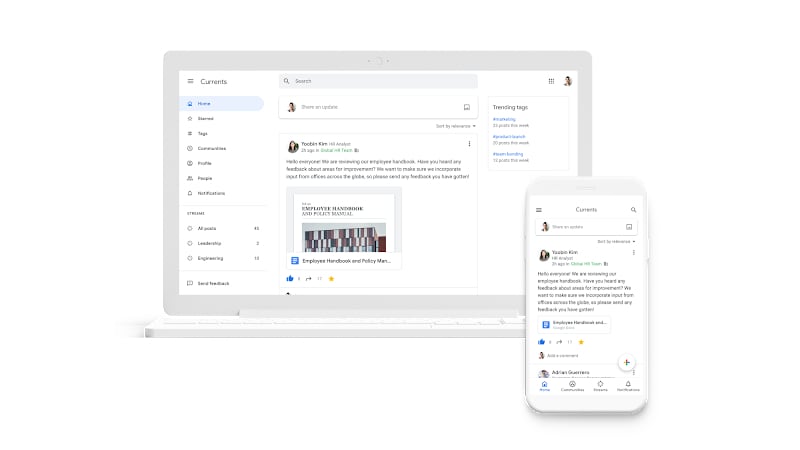 Google is now launching a new Currents app to replace the void that Google+ left behind, at least, for enterprises. The Google Currents app is available in beta for now, and G Suite users can request early access. G Suite users will also get all of their Google+ content transferred to Currents once they enrol for the beta app. Currents replaces Google+, and the new software brings a new interface, more content posting options, and ease in discovery of posts. Of course, this is not the first app called Google Currents - the original was launched in 2012 as a magazine reader app, before being integrated into the Google Play Newsstand app the next year.

The Currents beta app is available on all G Suite editions, and to request access to the beta programme, organisations will need to send an email to currentsbeta@google.com has to be made. Replacing Google+, Currents brings all the important features of the old app, but comes with a new interface, easy access to tags, attach button, and new compose content UI as well. Individual users can also track analytics for their posts, and large organisation users get a platform where leaders can engage with their employees more directly, ‘allowing them to take the pulse of their organization and understand what's important.'

Google notes that ‘posts from leadership can be given priority in the home stream, improving visibility across the organization to drive alignment.' The Currents app also connects employees to useful and timely content that is personalized to their role and interests. Users can avail features like tags and streams to make discovery of content easier and faster. The content stream can be chosen to be ordered by relevance, or the time it was posted.

As mentioned, organisations interested in trying out Currents beta, can mail to currentsbeta@google.com.

This isn't the first time Google is launching an app with the name Currents. Earlier in 2012, it launched a magazine app called Currents, that was later shut down, to make way for a new app called Google Play Newsstand.

SpaceX Postpones First Falcon Heavy Commercial Launch Due to Strong Wind
Black Hole Image Is Beautiful and Profound, but It Doesn't Tell Us Much