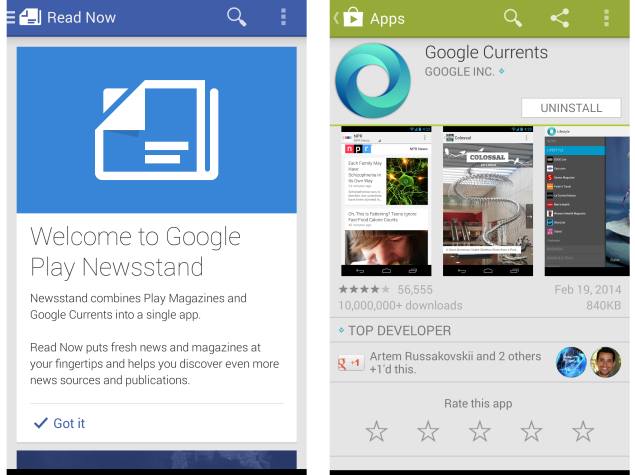 If you are one of those few who were addicted to Google Currents then there is some bad news for you. Google Currents app has completed its full circle like its app icon. Google has started rolling out the final update 840KB update to the Currents app which officially takes it offline.

Once users will update to version 2.3 of the Currents app, they will be asked to launch the Google Play Newsstand in a welcome message, which reads:

"Google Play Newsstand is a new app where you can enjoy favourite news, blogs, and (where available) magazines. Newsstand replaces Currents. All your Google Current subscriptions have been transferred to Newsstand."

Once users choose the launch the Google Play Newsstand app, the Currents app is automatically removed from their smartphone's app drawer. The Play Store page even removes the 'Open' button so users are left only with the option to uninstall.

If users really want to retain Currents for a little while however, here's a little trick that we at NDTV Gadgets tried - all users will have to do is to go to Settings>Manage Apps, and then uninstall updates to the Google Currents app. This will replace the app to its initial state (factory version) and the app icon is restored.

We are not sure whether you will get the stories updated further but the Currents app will at least be restored to app drawer. A report from Android Authority says that the old version of the app is still operational, but there is now word on its further life.

Google Currents app never really got much traction since it had launched in December 2011. The app couldn't stand up to the likes of apps like Flipboard.

Last year in November, when Google decided to combine its Currents and Play Magazines app into one app, it was renamed Google Play Newsstand.

Google Play Newsstand app integrates Currents with magazine and newspaper subscriptions, and offers all content in one location, as well as content from online publications, blogs and news feeds.
Comments