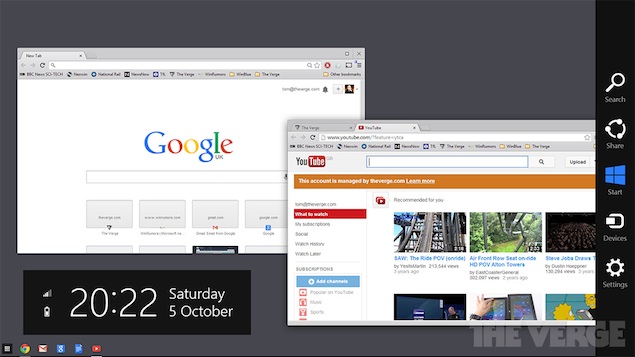 It looks like Google wants to capture your desktop even if you're not using a Chromebook.

The company has updated the developer beta version of Chrome for Windows 8, to bring Google Apps functionality in the Metro/ Modern UI mode of Windows 8, similar to how they presently run on Chrome OS.

While users can choose to launch the beta Chrome browser in both desktop and Metro/ Modern UI mode (as a native Windows 8 app), the stable version of Chrome just opens as a full screen browser. However, the latest developer version, when run in Metro/ Modern mode, looks and behaves like Chrome OS, as noted by a report by The Verge.

It brings a new app tray with app icons for Chrome, Gmail, Google, Docs and YouTube. These icons can be arranged by users at the bottom, left or right of the screen. There's also an app launcher located at the lower left-hand corner for firing up Chrome apps.

Similar to functionality in Chrome OS, users can launch more than one browser window with the Chrome Windows 8 app, and arrange them easily with a snap to the left or right of the display or in fullscreen modes.

The report notes that Chrome's latest dev build is utilising a special mode available for the web browser, through which they can launch as Metro/ Modern apps and use the snapping feature. However, the same functionality is not permitted on Windows RT, the ARM-based version of Windows. It's not clear when Google will make the feature available in the stable build of the browser.

Last month, Google had launched a new generation of Chrome apps that have the capability to work offline, can work independently without the need to open the Chrome browser and can connect to the cloud, enabling users to access and save documents, photos and videos on their hard drive as well as on cloud storage solutions like Google Drive.

The Chrome apps also offer desktop notifications for reminders, updates and other actions. They are also able to access and interact with the computer's USB port, Bluetooth and other devices connected to the computer, including digital cameras. Google had also launched the Chrome App Launcher for Windows that appears when users install their first Chrome app, as a launcher in the Windows task bar featuring shortcuts for the installed apps that launch in their own independent windows.
Comments