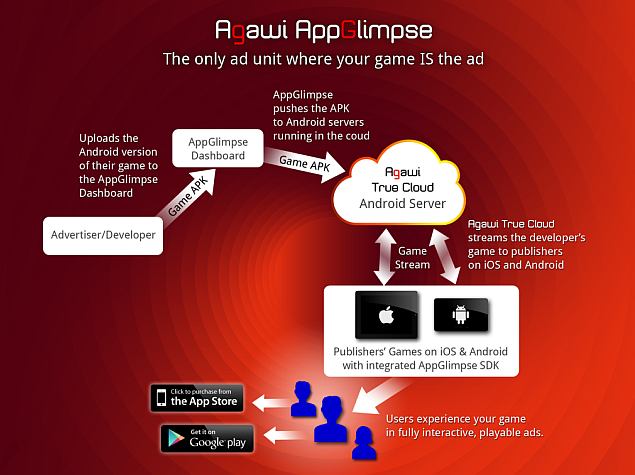 Google has acquired an app streaming startup named Agawi. The company is said to have been silently acquired last year, and now Google has confirmed the buyout after reports hit the Web. Agawi's technology lets users easily preview apps or games by streaming them onto their handsets without installing or downloading them from Google Play.

The Mountain View firm is likely to integrate the app steaming technology into its mobile advertising business and into Google Play for users to try out or preview apps without installing them. This could be in the form of in-app ads or just a preview feature on app listing pages, letting users see if they want to actually buy or download it. The streaming technology could be used for many other purposes as well, including providing app-based services without clients. The name, Agawi, stands for 'any game, anywhere, instantly'.

Hints of Agawi having been acquired have been around for a while, reports point out, with the firm's Twitter account was inactive since 2013, its website being dead, and three of its now working for Google, as evinced by their LinkedIn profiles - including the firm's co-founder, Rohan Relan. However, Peter Relan and Rajat Gupta the Executive Chairman and the CEO of Agawi respectively do not mention Google in their LinkedIn profiles.

The news was reported and was later confirmed to TechCrunch by Google in a statement, "The Agawi team has joined Google. We aren't sharing other details."

Talking about apps, Google this week also brought its Material Design-based Clock app to the Google Play store for non-stock Android users. The offering joins the long list of Google apps that already are available for download from Google Play. Bringing the app to Google Play would make it easier for the search giant to roll out regular upgrades.