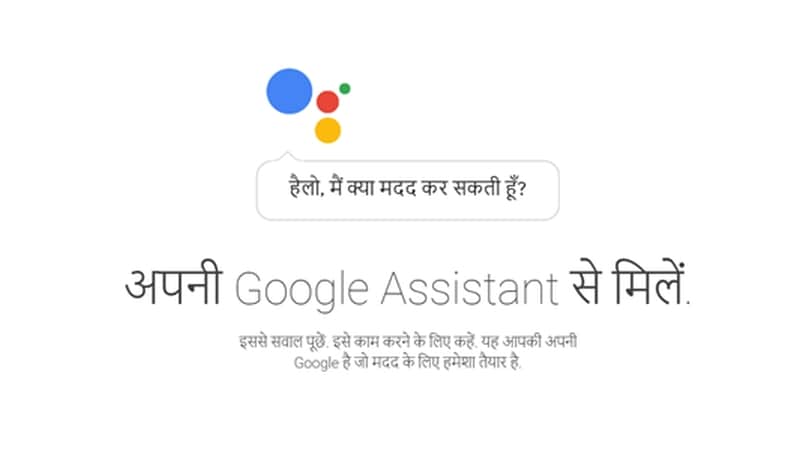 Google Assistant has now officially received Hindi support. The new support is rolling out to devices with Android 6.0 Marshmallow and above and will soon debut on Android 5.0 Lollipop, iPhones (iOS 9.1 and above) and Android Oreo (Go edition) devices. It comes days after Actions on Google received support for Hindi and 15 other international languages. Signs of Google Assistant supporting the Hindi language had emerged in late January when the voice-based personal assistant started giving results for few Hindi queries. In December 2016, Google Allo received a native Hindi Assistant and Google launched a special Google Assistant version for Jio Phone with support for Hindi and English languages.

To access Google Assistant in Hindi, set your device language to Hindi and then touch and hold the Home button or say "OK Google" command. You need to download the latest Google Search app to receive the new experience. Further, Google has built a dedicated site to highlight what Hindi commands you can use in the Google Assistant app. It is worth noting here that since Hindi support is rolling out for compatible devices through a server-side update, it may take some time to reach your device.

With the latest development, Google Assistant has once again made the competition difficult for Amazon Alexa and Apple's Siri that both are yet to add Hindi support. The arrival of Hindi Google Assistant also make the space for the launch of Google Home smart speaker range. Moreover, it ultimately opens an avenue to let non-English speaking users experience Google Assistant right by passing commands in Hindi. Users can access the new support to send text messages, set reminders, or get directions directly through Google Assistant. For instance, you can instruct Google Assistant "Kal subah mujhe saat baje jagaao" to set an alarm for 7am. You can also similarly ask "Cricket ka score kya hain?" to get cricket score updates.

Last month, Google expanded Actions on Google in 16 languages, including Hindi, Thai, Indonesia, Danish, Norwegian, Swedish, and Dutch. That move was aimed to help developers create deep link actions within the Google Assistant app for languages other than English. Strategically, the Actions on Google set the pitch for the Hindi Google Assistant that is now rolling out for the masses.

Notably, Google silently added Hindi support to the Assistant app in the past, as we reported in late January, that was limited to few Hindi queries and was mainly designed for voice commands in Hindi. The previous development did include the ability to respond users in Hindi though it was transcribing Hindi commands to English and accepting Hindi queries via transliteration.

"The Google Assistant is truly Indian, it's your helpful dost that speaks our language and understands the things you care about, from finding biryani recipes, to pulling up the latest cricket score, or finding directions to the nearest ATM. In order to make it even more useful to Indians over time, developers and businesses can now build Actions for the Hindi Assistant through the developer platform Actions on Google. Once an action is built, you can just say 'Ok Google, talk to' and access the service or content straight through your Google Assistant," said Purvi Shah, Technical Program Manager, Assistant, in a press statement.