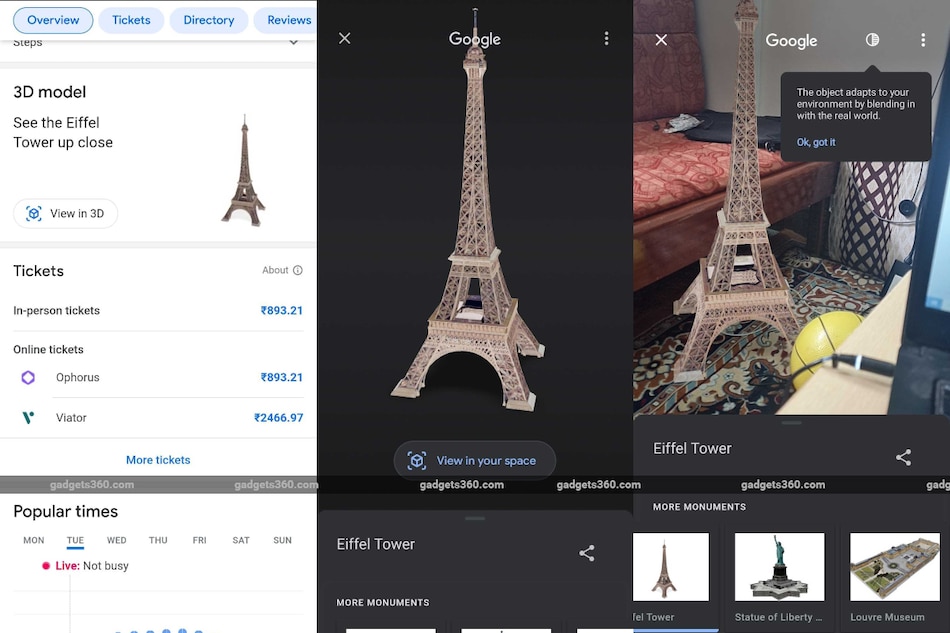 Google has reportedly added 3D monuments to its AR Search results. There are 98 monuments that were found to give 3D results to users. These Google AR search results are showing up for Android and iOS users, and is not available for desktop users yet. Monuments like the Big Ben, Eiffel Tower, Louvre Museum, and Tokyo Skytree offer 3D search results. Earlier, Google has offered 3D search results for various categories like birds, bugs, land animals, space objects, and even athletes.

9to5oogle reports that Google has now added monuments to its 3D and AR search results list as well. To view these results, head to Google.com or the Google Search app on Android or iOS. Search for the monument that you would like to view in 3D. If the searched monument is available in 3D, a ‘view in 3D' button will appear next to the revolving image. Users can then view the monument from all angles. There is also an option called ‘view in your space' allowing users to superimpose the monument in their surroundings.

Apart from 3D search, Google recently also introduced a new feature to expand vocabulary and increase language proficiency of users. The Internet giant has added a new feature on its app that lets users learn a new word every day. With the Google app on your phone, you can sign up to receive daily notifications that help you master new words and some of the interesting facts about them. Users can open the Google app on their smartphones to look up the definition of any English word. Once the user search a definition, entries will appear with a 'bell' icon on the top-right corner. Clicking the icon will activate the feature. The update is currently limited to the Google app on phone.