Gmail Gets Tabs for Mail, Chat, Meet, and Rooms; Integrates Google Chat for All Accounts: How to Activate

Gmail’s new tabs will appear in a separate bar at the bottom for the app and on a sidebar for the Web version. 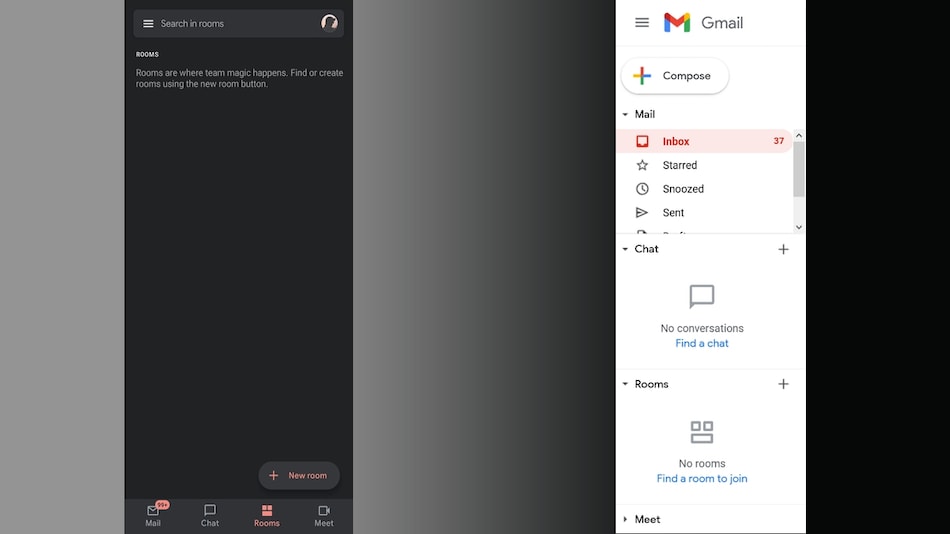 Gmail has made its Chat and Rooms feature available to all of its users. This feature was already available for its Enterprise users and Google will now make the integrated workspace feature available for personal account holders as well. Google doesn't want users switching between multiple tabs to use its services, so Gmail is now getting four new tabs so that all work can ideally be done on one page. The tabs under this integration will be available for Android and Web users. There has been no information on when iOS users will get the feature.

Google's integration for Gmail for all its users was first reported by 9to5Google. Gadgets 360 could independently verify that both the webpage and the Android app are now showing four new tabs — Mail, Chat, Meet, and Rooms. Chat is where users can message an individual or a small group of Google users. Rooms appears to be a Slack competitor that is dedicated to a large group of users where they can share files and tasks.

Once a user activates this setting on their accounts, it will be visible at the bottom bar of the Android app. On Gmail's Web client, the sidebar with the four sections will appear on the side of screen by default and can be hidden by clicking on the chevron (double-arrow icon). The functionality of these new features remains similar to Google Chat's standalone app. The addition of these features to Gmail will enable users delete the dedicated chat app if needed.

How to activate the new tabs on Gmail

Google has provided the steps on how to activate the new features for the Android app or the Web client.

On Android, head to Settings > Personal Gmail account > General > Chat (Early Access) > Try it. The app will relaunch and give a tutorial on how to use the new feature. If you have the standalone Google Chat app, it will give you a prompt to turn off notifications from it too.

On the webpage, users will have to head to Settings > All settings > Chat and Meet > Google Chat (Early Access) > Save changes.