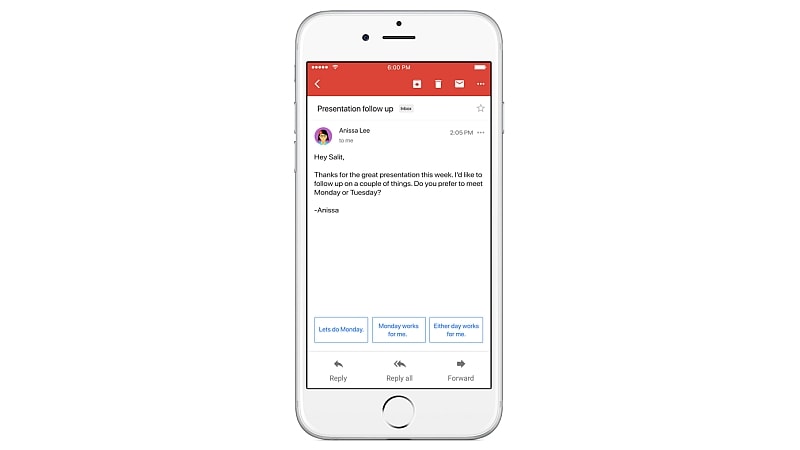 Google has been working on the Smart Reply for a while, and we first got a glimpse of it with Inbox by Gmail, before seeing improved versions in Google Allo. Now, at the Google I/O 2017 Keynote address on Wednesday, CEO Sundar Pichai announced the Smart Reply is now rolling out to Gmail.

Smart Reply will suggest quick responses to your emails, and, starting Wednesday, will begin rolling out to Gmail for Android and iOS. It will roll out globally in English first, with Spanish to follow in the coming weeks. Support for more languages is coming, the company revealed.

The Smart Reply feature utilises machine learning to adapt to the user, and gives more appropriate responses the longer you use it. Smart Reply suggests three responses based on the email you received. Once you have selected one, you can send it immediately or edit your response starting with the Smart Reply text.

Google had several other announcements to make at I/O 2017, including that Android is now on over 2 billion active devices, and that Google Photos now has over 500 million monthly active users. It also revealed a brand new tool called Google Lens, a visual recognition tool that will first make its way to Assistant and Photos before coming to other products. Another major, expected announcement was Google Assistant for iOS.