Gmail users no longer have to long press on an Email address to copy it. 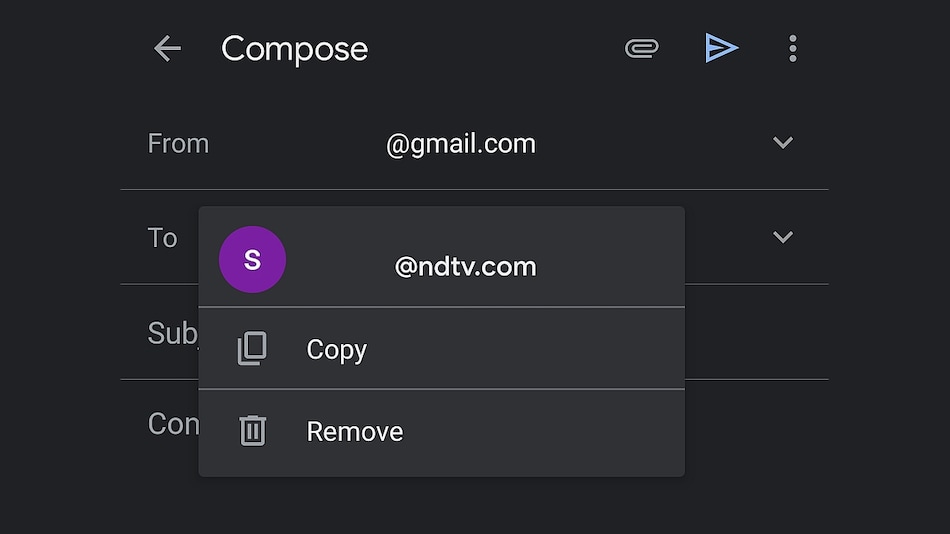 Gmail’s new copy and remove options look like this

Gmail for Android app now allows for easy copying and pasting of Email addresses. Google has added a copy and remove button to the Compose Mail screen on the app. The new tweak makes it easier to copy and paste Email addresses as well as removing them. Google didn't make an announcement regarding the new change. However, Gadgets 360 was able to verify the new feature on the Android app. This leads to speculations that the latest feature could be under A-B testing and may be rolling out to users in phases.

Android Police was the first to spot the new feature. When composing an Email in Gmail for Android, users will now just need to tap on an Email address to access the Copy and Remove options. Earlier the same was possible by long pressing the Email address that showed users a pop-up menu to carry out the action.

The update doesn't seem restricted to a specific version of the Gmail for Android app.

Google had updated the Gmail for iOS app in November 2020. The update added a widget for users on iOS 14 (and above) that lets them search or compose a mail. Alongside, Google also added a widget for Drive that allows users to search any document they might have stored on Google's cloud.

In another update for Gmail in November 2020, Google added the Contacts tab to Gmail that lets the users see a detailed information card. The card will hold the information like the phone number, Email address, team, manager, and office location. Google introduced this feature to optimise collaboration and communication with stakeholders but they claim for it to work, all the user's data should be spread across Google Workspace.