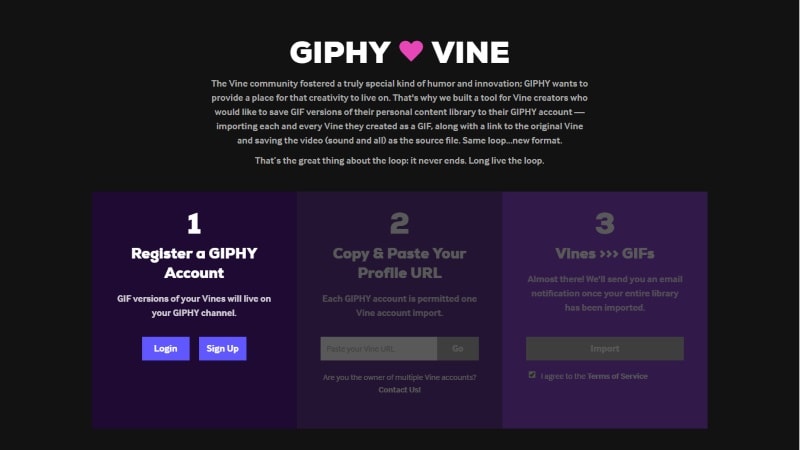 Twitter announced last week that the company will be discontinuing the mobile app of the Vine video sharing platform in the coming months in order to cut down on costs after it posted quarterly results below Wall Street estimates. Even though the 6-second video sharing platform was not at its peak recently, there were many users who were left disappointed. Now, popular media sharing website Giphy has come forward with its tool that enables people to save their Vines and keep them forever.

The conversion tool, which is now available on Giphy's website, allows users to transfer their Vines, collectively or individually. Giphy says that these files will be shareable in form of GIF images initially but the videos (with sound and visuals) will be with the website in the source data for each and every Vine transferred. Users are required to have an account on Giphy in order to make these transfers.

This can be considered as a welcome move by Giphy, as Vine users might have been disheartened at the prospect of losing out on their beloved collection of video clips. However, the competition between various media sharing platforms is seemingly intensifying with each passing day. Notably, Twitter in its announcement did mention that website would continue to work, so that users and the world could continue to watch the content that had been uploaded prior to the discontinuation. The app would continue to work for viewing. It did add that users will be notified in case any changes are made to the app or website.

Vine's co-founders of recently unveiled their new live video broadcasting app, named HYPE, which might act as a direct competitor to Facebook's Live videos. Launched first in the beta phase, the HYPE app is now available to download via the App Store with support for Android coming soon. HYPE allows users to add animations and sounds to their videos and might pose a competition for other platforms.

Sony Surprises With Profit Warning on Sale of Battery Business