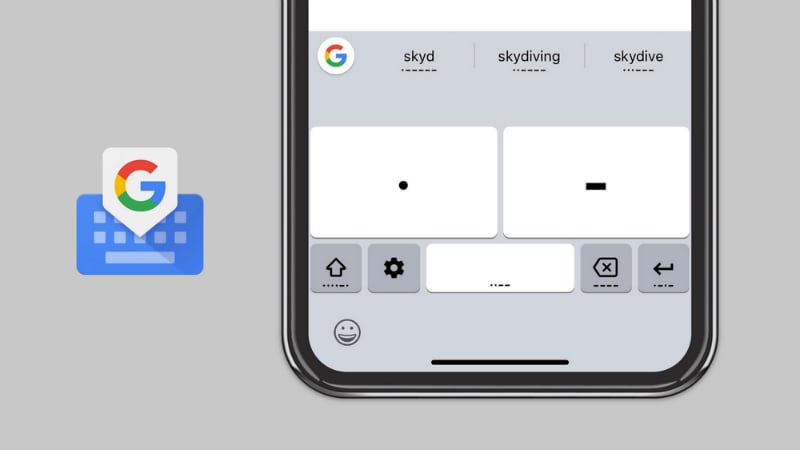 Gboard has now brought Morse code support to iOS. The input method that is useful for those with different communication abilities was initially launched in beta for Android devices at Google I/O 2018 in May. Alongside its iOS debut, Google is rolling out improvements to Morse code on Gboard for Android to enhance the original experience. The search giant is working with developer Tania Finlayson who uses Morse code to communicate. A recent beta version of Gboard was also spotted with a dedicated Mini mode for Morse code that reduces the height of the dot and dash buttons to give users more screen space.

As announced through an updated blog post, Google is rolling out Morse code on Gboard for iOS and improvements to Morse code on Gboard for Android. The keyboard maker has also built a game that you can play on your Android or iOS device or on your desktop to develop skills to work with Morse code. It is claimed that the game can help you learn how to type in Morse code in "less than an hour". Furthermore, the Gboard team is working closely with Finlayson to improve the existing Morse code experience. The developer has notably been communicating with Morse code using a device invented by her husband prior to the latest integration into Gboard.

To get started with Morse code on your iOS device, you need to download the latest Gboard app through the App Store. After that, go to Settings > Gboard > Keyboards and then enable Gboard to make it as the default keyboard app on your iPhone or iPad. You can also enable the Allow Full Access option to let the Gboard app offer you suggestions based on your typing patterns.

Once Gboard is enabled as the default keyboard on your iOS device, you need to switch to the Morse Code input method. For this, tap the globe icon and then go to Settings > Languages > Add language... and now search for Morse Code (US) to add it as an input method to your Gboard. You can anytime switch to the traditional QWERTY keyboard if you don't want to use the alternative communication way.

It is worth noting here that the latest Gboard app requires iOS 10.0 or later and is sized at 147.5MB. It works with all the iPhone models starting from iPhone 5s to iPhone X and all the iPad versions starting from iPad Air and iPad mini 2 to 12.9-inch iPad Pro as well as iPod touch.

Android users, on the other hand, need to use US English on devices running Android 5.0 and later to experience Morse code on the latest Gboard app. The app is available for download through Google Play. Once you've installed the app, go to Settings > Languages & input > Virtual keyboard > Gboard > Languages > English (US) and then swipe left through the options to pick the Morse code option. You can also hear sound feed as you enter Morse code on your screen by turning on the Sound on keypress option.

Google hasn't defined what are improvements heading to the Android counterpart of Gboard. However, as spotted in the Gboard for Android version 7.4 earlier this week, a Mini mode for Morse code input method is already rolling out that cuts the height of the dot and dash buttons by almost half. It is also reported that the settings for the letter and word timeouts have been redesigned to help users modify timeout sliders directly from the page, instead of tapping on individual items to open a dialogue box, to easily start typing using Morse code.