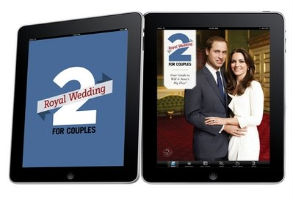 Highlights
Not feeling the royal wedding spirit yet? It may be time to download a countdown clock to your smartphone.

More than a dozen smartphone apps are offering to bring fans everything royal wedding-related wherever they are -- so they can check the days and minutes until Prince William and Kate Middleton's April 29 wedding, hoard news and pictures about them and instantly share their favorite royal wedding tidbits on social media networks.

Most of the apps are tailored for iPhones or iPads. Some are fairly informative: There are apps that feature live coverage of the wedding on the day, a weather forecast for London's Westminster Abbey up to 10 days in advance, and royal protocol in case, for whatever reason, you need to greet the queen.

Hello! Magazine, a popular source of celebrity news, promises exclusive commentary, while an app developed by mobile games company Neon Play has teamed up with Ian Jones, a photographer who has snapped William's portrait in the past, to dish up 100 exclusive images of the royal family.

If that isn't enough, one iPhone app -- "Alarm Royale" -- even lets people set their phone alarm clock to a wedding march or royal-themed music like "God Save the Queen" and "Rule Britannia."

Once a person wakes up, the app also shows them a new fact about the royal couple every day, said developer Mark Riley.

Like Riley, many app developers aim to connect users to a digital community of royalists all over the world. While the U.S. and Britain are the largest markets, people are downloading the apps from as far away as the Philippines and Saudi Arabia.

"It's one big party," said Diane Hall, president of Toronto-based 2 For Life Media Inc., which launched an iPad royal wedding app that lets users share marriage advice and wedding tips to the royal couple through a virtual guest book. Wills and Kate -- as they are known in the British tabloids -- most likely will never read the entries, but part of the fun is reading up on what other "guests" want to tell them, she said.

"You get an interactive experience. You can be informed but also share with others and have a good laugh," Hall said.

With online social media and digital technology, more people than ever can "participate" in the historic event in real time.

Palace officials are putting all their official royal wedding photos up on the photo-share site Flickr, and a royal wedding website is in place to spread the word for the latest announcements. An official Twitter account ensures that those messages travel far and wide.

And the millions of fans who won't get a chance to line London's streets for the royal wedding procession can still get a feel for the route with a 3D map introduced by Google maps earlier this month.

All that is probably too much information for most men, though.

"We make it fun for the men, but I think the women are the really keen ones," Hall said with a laugh.
Comments