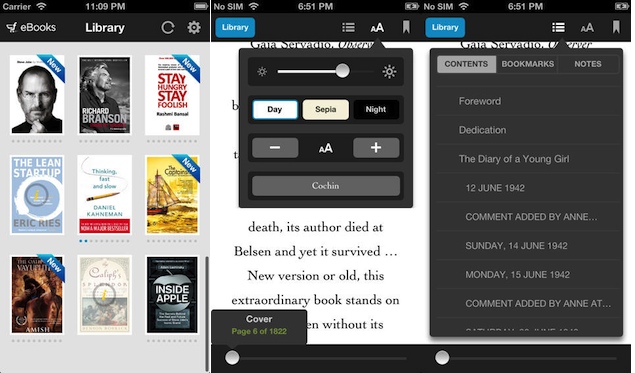 Indian ecommerce giant Flipkart which had introduced ebooks in November 2012 with an Android app, has now extended the service to other platforms with the launch of its eBooks app on iOS, and Windows Phone in addition to a Web interface for the service. Flipkart has also inked a tie-up with Nokia under which app will be pre-installed on upcoming Nokia Lumia devices.

Flipkart has also revamped its existing Android app, with several usability improvements. All the apps are available free of charge from respective app stores.

Ravi Vora, Senior Vice President - Marketing, says "Flipkart is a clear leader in the Indian books market with 40-45 percent share of the organized books market in India. Providing seamless content, regardless of platforms, will be a big part of our strategy to further strengthen this position and extend it to the digital space."

Among the various features offered by the app, the major ones include the use of 'FlipStream technology' that Flipkart claims to have created to speed up the reading experience across apps, enabling the reader to access any section of the ebook instantaneously, ebook Recommendations based on the reader's reading habits, in addition to personalisation features that give users the option to control their reading experience by selecting their preferred reading mode (day, night and sepia), font size, orientation (landscape/portrait), among others.

Readers will also be able to highlight the text, take notes, bookmark pages and even refer to a dictionary while reading, without having to leave the app.

Speaking about the app launch and Flipkart's upcoming plans for ebooks, Mekin Maheswari, Head - Payments and Digital Media, said,"Everything we do at Flipkart is about making the end-user experience easier and more delightful. We don't believe that the ebook experience should be restricted to a single device. With the launch of these apps, our ebooks titles are now accessible to all readers, no matter which device they use. We already have 2.5 lakh titles on the site and we aim to increase this to 10 lakhs by year-end. And all of these can now be read by a customer, through any smartphone, tablet or PC."

The Android, Windows Phone and web apps will allow users to purchase books from within the app. The iOS app doesn't include the feature most likely due to Apple's policy of charging a 30 percent cut on every purchase. Even Amazon's Kindle iOS app doesn't offer books purchase.

Flipkart has also used the FlipSync technology that automatically syncs the last read location, highlights, notes and bookmarks across every device one has ever used to log in to the Flipkart ebooks app. It also offers previews through 'FlipThru' allowing readers to read 10 percent of the ebook even before buying it. It's interesting how the company has named some of these features on the lines of Amazon, which also offers ebooks.

Interestingly, Flipkart will also offer some exclusive pieces from writers like Khushwant Singh and Sidin Vadukut to Nokia Lumia users.

Flipkart competes with Amazon and Google in the Indian market. While Amazon launched the Kindle store and its basic ereader in August 2012, Google introduced the Google Play Books service in February, this year. Amazon offers its ebook reader app on all popular OS platforms in addition to a web browser based reader. Google Play Books offers apps for Android and iOS, but the books can be downloaded and read on third party apps through the Adobe Digital Editions Desktop Reader.
Affiliate links may be automatically generated - see our ethics statement for details.
Comments