To enable the support for new languages, Flipkart claims that it has translated over 54 lakh words in Kannada, Tamil, and Telugu. 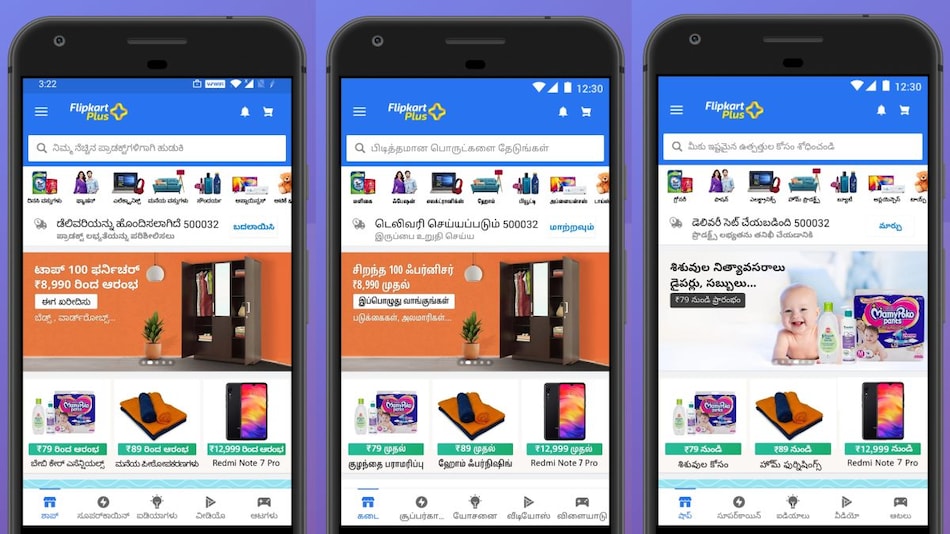 Flipkart has initially enabled the new experience in Kannada, Tamil, and Telugu on its mobile app

Flipkart today enabled its shopping experience in Kannada, Tamil, and Telugu. The new language integration, which is initially limited to Flipkart's mobile app, comes over nine months after the Walmart-owned company start supporting Hindi on its platform. The latest move is aimed to make online commerce “more inclusive and accessible” for Indian language customers and reduce the access barriers for people who don't understand English and Hindi languages but want to buy products through the e-commerce platform. Flipkart's competitor Amazon currently supports just English and Hindi languages.

To enable the new experience, Flipkart claims that it has translated over 54 lakh words in Kannada, Tamil, and Telugu across product specifications as well as elements such as banners and payment pages. That translation ultimately resulted in the new experience that is targeted towards smaller towns and cities in the country.

The launch of Hindi language support that took place in September last year helped Flipkart move ahead with the three new languages. The company told Gadgets 360 that about 95 percent of its consumers who opted for Hindi continued using that interface. However, there aren't any details around the total number of Flipkart's customers using the Hindi language interface.

Significant proportion of growing user base in southern states
Flipkart said that it decided to go with Kannada, Tamil, and Telugu as the new Indian languages after its initial launch in Hindi as southern states account “for a significant proportion” of its growing user base, along with a higher adoption rate of native language script. The company conducted an ethnography study with participants across cities including Salem, Visakhapatnam and Mysore alongside using a mix of translated and transliteration of words over several months to make the new experience encouraging enough for new consumers.

“As a homegrown e-commerce marketplace, we understand India and its diversity in a more nuanced way and are building products that have the potential to bring a long-term change,” said Kalyan Krishnamurthy, Chief Executive Officer of Flipkart Group, in a statement. “The introduction of Tamil, Telugu and Kannada interfaces, in addition to Hindi and English, is a meaningful step in that direction in line with our mission to democratise ecommerce in India.”

Winning move against Amazon?
India is yet to become a huge market for e-commerce players despite the fact that there are close to 69 crore Internet users in the country. As per a report by the World Bank, online sales in comparison to total retail sales in the country are still only 1.6 percent. This is significantly lower than over 15 percent in China and around 14 percent globally. In such a scenario, online marketplaces need to go with localisation to bring new customers on board.

As many as 53.6 crore Indian users are expected to use regional languages browsing the Internet by 2021, according to a Google-KPMG study. Thus, the move towards adding Indic language support to platforms is likely to help e-commerce companies attract the masses in the country.

Flipkart Chief Product and Technology Officer Jeyandran Venugopal in the statement to the media highlighted that almost 58 percent of its total user base comes from tier-II cities and beyond. This also highlights how local language expansion could be helpful for the company.

However, unlike Flipkart's latest launch, Amazon only has Hindi and English support on its platform. This shows a lag on the part of the US e-commerce company as it won't be able to cater to the consumers who don't speak or understand languages beyond Hindi and English. That said, we can expect Amazon to take a similar move and expand Indic language support on its platform in the coming future.