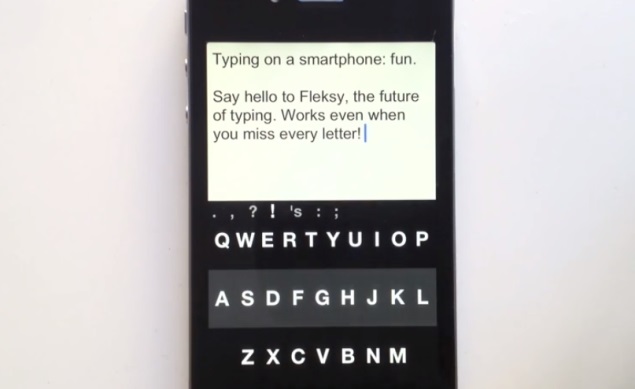 Android users have been enjoying third-party keyboards way before iOS, but that has changed - in at least select apps - thanks to Fleksy's on-screen predictive text input technology.

San Francisco-based Fleksy, which earlier offered a keyboard for users with visual impairments, has now announced a kit that enables third-party developers to integrate alternate keyboards into their own apps. Users can then choose between the default iOS keyboard and the Fleksy-provided third-party keyboard.

This, of course, means that unlike Android which offers system-wide support for third-party keyboards, Fleksy-powered keyboards are available only in apps that explicitly add the SDK during development. As of now, four apps support Fleksy on-screen predictive text input with their latest updates. These are GV Connect, an SMS app; BlindSquare, a geo-location app; Launch Center Pro 2 and Wordbox, text editor.

Macworld notes that the Fleksy's keyboard offers a different input method and a new predictive algorithm, very different to what Apple offers. In addition, the Fleksy keyboard can correct a word, even if all the letters were typed incorrectly (based on relative positioning of the keys), something the stock keyboard struggles with.

Fleksy founder Loannis Verdelis told [The Verge], "With every new version of iOS the work required on our part to build a keyboard SDK has reduced significantly. We're [now] doing stuff on iOS that integrates the keyboard deeper than it's ever been integrated."

Fleksy is iOS 7-only, as Apple has reportedly made some changes in the latest release of the operating system to make Fleksy-like alternate keyboards possible. It will be interesting to see if popular Android third-party keyboards like SwiftKey and Swype take a similar route to find their way onto iOS.