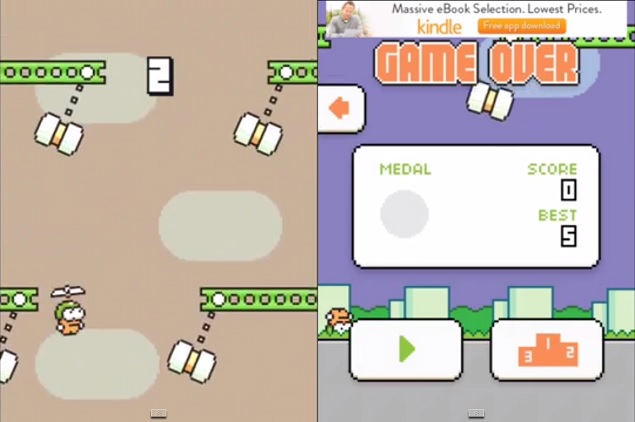 After the unexpected success of Flappy Bird, creator Dong Nguyen faced intense scrutiny, which led to him eventually pulling his game from the App Store and Google Play. He finally re-launched the game - but only for the Amazon Fire TV - at the start of August. Now, Nguyen has released another game, called Swing Copters, which looks like a spiritual sequel to Flappy Bird.

Touch Arcade did an exclusive review of the game you can read here - you can also see the trailer below:

Like Flappy Bird, Swing Copters is a kind of endless runner, and it looks to be brutally difficult as well. The visuals retain the primitive aesthetic that came to define Flappy Bird - and the gameplay is also a simple, one-touch experience.

The difference is that in Flappy Bird, you used the taps to simply flap upwards - tapping quickly gained altitude, and with careful tapping you could maintain your level or drop as required.

In Swing Copters, you're playing as a little dude with a helicopter-cap, rising up past girders which have swinging hammers attached, for some reason. He's also drifting from the left to the right, and tapping the screen just changes the direction he's moving in.

It looks like it could have the same addictive quality as Flappy Birds did, though it's of course very hard to say about this kind of game without having played it. After Flappy Birds became a big hit, a cottage industry of imitators came up, but few were able to replicate its success.

Luckily, Swing Copters is expected to launch on August 21, for free, so we won't have to wait long to find out if lightning strikes twice.