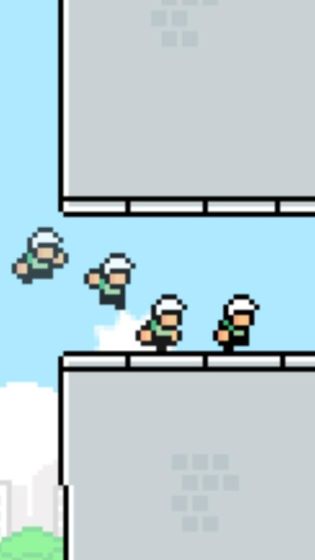 Dong Nguyen, the mobile game developer best known for his ridiculously popular retro-style game, Flappy Bird, has teased his latest game with a screenshot on Twitter.

Nguyen on Wednesday said that his next game would involve players controlling a character who jumps from one building to another.

However, Nguyen now has taken a step further on Twitter by saying, "I am making a new game. So people can forget about Flappy Bird for a while" and attached a screenshot of the game, which goes in line with what he explained before.

Interestingly, Nguyen's latest tweet of forgetting 'Flappy Bird for a while' slightly contradicts his announcement during CNBC's interview, where he had said a 'less addictive' version of Flappy Bird will come back to app stores with multiplayer features in August. However, it could just mean Nguyen's new platforming game will release before August.

Nguyen had decided to remove Flappy Bird from apps stores abruptly in February, saying that it had become "too addictive" and that it had been having a negative effect on his "simple life".

At its peak, Flappy Bird's in-app advertisements had been generating around $50,000 (roughly Rs 3,00,000) per day in revenue. The game was so popular that hundreds of clones popped up on app stores even before Flappy Bird was removed.

Several developers had rallied in support of Nguyen, who had claimed to be under intense stress ever since the game became a hit, and held Flappy Jam. As part of the Jam, developers submitted over 800 Flappy Bird alternatives, which weren't mere rip-offs.

Notably, Rovio - perhaps one of the most successful mobile game developers thanks to its hit franchise Angry Birds - has also released a Flappy Bird-inspired game, called Retry. Like Flappy Bird, whose developer had directly equated the game's baffling success (and reason for pulling the game) to its addictiveness, the very name of Rovio's new game implies a high-level of difficulty and the obsessive need to 'Retry'.

Silicon Valley Is a State of Mind, Can Be Anywhere: Vinod Khosla
FCC to Help Small Firms Buy Airwaves