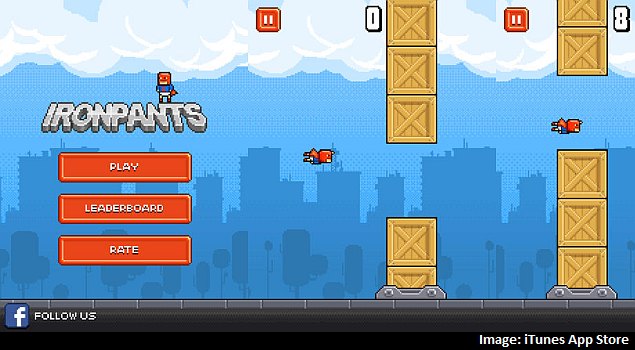 On Feb. 9, the Western world fell into chaos as "Flappy Bird," a highly addictive game, was removed from mobile app stores by Dong Nguyen, an independent developer in Vietnam.

Since then, people have scrambled to create clones of "Flappy Bird," including "Fly Birdie," "Flappy Bee," "Flappy Plane" and "Ironpants," to satiate the addictive gaming habits of smartphone owners.

"Flappy Bird" has continued to take on an almost cultlike following with game developers and consumers.

You can now buy "Flappy Bird"-themed T-shirts, mugs, neckties, sweaters, iPhone cases, wristwatches, pillows and jewelry. There are even crocheted "Flappy Bird" hats for sale on Etsy to keep you warm during these cold winter months.

"Flappy Wings," which calls itself a parody of "Flappy Birds," is the most downloaded free app for Apple's iOS. "Splashy Fish," a sort of "Flappy Birds" underwater, is the third-most-popular free app on iOS. There's also a "Hoppy Frog" in the top charts, which - you guessed it - uses a frog instead of a bird.

While Nguyen no longer sells "Flappy Bird," in addition to the clones of the game, people have ported it to dozens of other platforms, beyond just smartphones.

Last week, a developer made a cubelike version of "Flappy Bird" for Minecraft. Another developer created a version that can run on the Commodore 64, an 8-bit home computer that went on sale in 1982 from Commodore International. There is now an ASCII version, which uses just standard characters used in The American Standard Code for Information Interchange, originally based on the English alphabet. And in one of the most impressive instances, the game has been ported to a Texas Instrument graphics calculator.

When the original game was taken down in early February, Nguyen said he pulled the game from the App Store because it was "an addictive product."

(Also see: Flappy Bird creator took down game because 'it was just too addictive')

It seem that given the obsession still swirling around "Flappy Bird," our obsessive flapping won't be ending anytime soon.