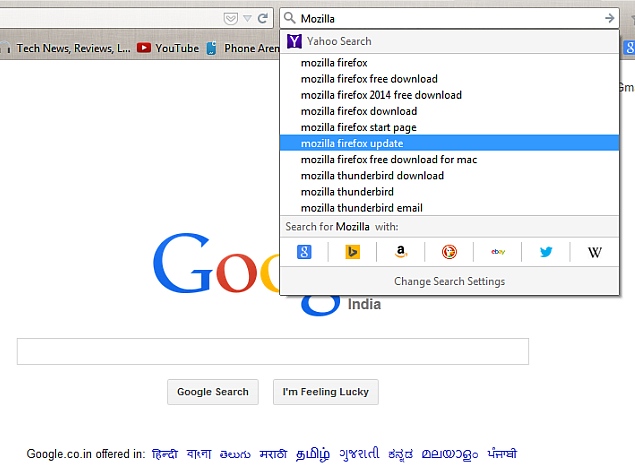 Mozilla on Monday launched the latest iteration of its Firefox web browser, bringing it to version 34 (specifically 34.0.5) for Windows, Mac, Linux, and Android (34.0) platforms. The browser gains a number of new features in its updated version.

It is worth noting that Mozilla Firefox 34 disables the SSLv3.0 for both desktop and mobile platforms after Google uncovered a security bug in the version back in October.

For desktop, Firefox 34.0.5 brings Firefox Hello WebRTC feature, through which users can make and receive calls in Guest Mode. TokBox, a Telefonica company, powers the feature.

Other new Firefox features include an improved search bar (US English only), easy theme switching through 'Customizing' mode, improved recovery in case of browser crashes, and HTTPS usage in Wikipedia search for secure browsing. Several other changes have also been made in the HTML5 mode and for developers, apart from a couple of fixes, all of which which can be seen in the Mozilla Release Notes website.

As for Android users, the Firefox 34.0 introduces browser tab mirroring support for Chromecast, through which users can view the same browser tabs opened on their handsets on to their TV sets. The updated browser shares the similar HTTPS usage for Wikipedia search like its desktop version (US English only), alongside public key pinning support, a brand new first run experience, and a new Firefox browser theme. SSLv3.0 has been disabled for Android as well.

Firefox 34.0 for Android also fixes the issues faced while playing MP4 videos on Android 5.0 Lollipop. It however misses out the Firefox Hello chatting feature, which might arrive on mobile platforms in later updates. The full list of changes can be seen in the Mozilla Release Notes page of the firm.

KitKat on 34 Percent of Android Devices; Lollipop Yet to Debut: Google
OnePlus One 64GB Model With Snapdragon 801 Launched at Rs. 21,999