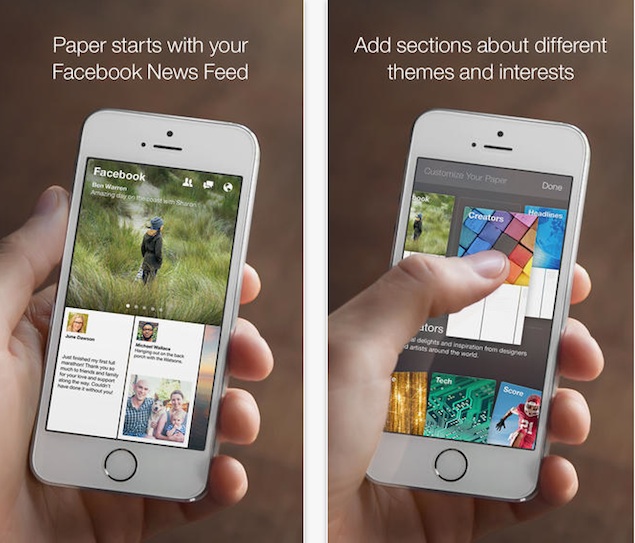 In terms of the modern corporate world scenario, it could very well be a classic retelling of the Biblical tale of David versus Goliath. The modern day battle as of now rages in the form of a naming controversy over an app. Seattle and New York-based iOS app maker FiftyThree reprises the role of David, with Facebook taking up the role of the giant.

Facebook on Monday released its new standalone Paper app for the iOS platform, technically titled 'Paper - stories from Facebook'. On the other hand, FiftyThree already has an award-winning app on the iTunes store called 'Paper by FiftyThree'.

While both the apps are very different from each other, the similarity in the names has not gone down too well with the Seattle-based firm. In a blog post written on Monday, titled 'Every story has a name' FiftyThree's CEO and co-founder, George Petschnigg wrote, 'There's a simple fix here. We think Facebook can apply the same degree of thought they put into the app into building a brand name of their own. An app about stories shouldn't start with someone else's story. Facebook should stop using our brand name.'

In fact taking a further dig at Facebook, he writes, "We were really surprised when we heard that Facebook was releasing an app called Paper. We have, in writing, asked Facebook to refrain from using the name. But their response was that they apologised for not letting us know sooner, but as it stands, they are continuing with their launch."

The difference between the two apps is evident. While 'Paper by FiftyThree' allows a user to sketch, draw, colour, outline and write on an iPad, 'Paper - stories from Facebook' allows a user to organise his or her news feed and improve the overall user experience on an iOS device. FiftyThree in its own right is not a lightweight. It has been honoured with awards for having one of the best apps for the iPad by numerous firms, including Apple themselves.

The New York Times, in a report on their Bits Blog, also details how the music of the video for the app developed by Facebook is similar to a that of the music for another product by FiftyThree.

In his blog post, Petschnigg also writes about how their own fans and users have been confused and asking whether the company has released a new app, or it has been bought out by Facebook. The stark difference in the two firms here is evident from the fact that Facebook has over 1.2 billion users, has 6337 employees and is worth over $150 billion. FiftyThree has 34 employees, its Paper by FiftyThree app has been download millions of times, and has last been funded for $15 million. In 2012 it was named as the 'Best App of the year' by Apple and has also received accolades from AIGA, IxDA, Communication Arts and TIME magazine.

The road ahead might be an interesting one to chart out. Petschnigg has detailed that 'they are keeping their options open' but dragging the social-networking giant to court sounds an uphill task for the small firm. It is very important to note that Facebook themselves have threatened to take firms to court on the usage of the word 'Book' in their names.

Given the fact that it has both the manpower and resources to settle the issue, Facebook appears least interested and has declined to comment on it. Whether or not the tale will end as the original Biblical version, is something that only time will reveal. As of now the battle seems far from over.