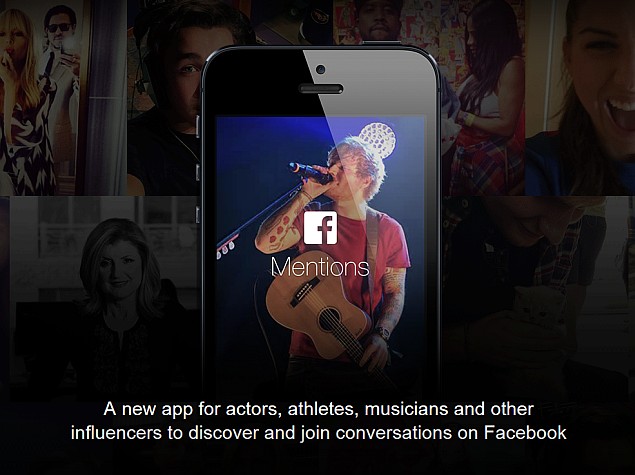 After releasing the Facebook Mentions app in the US last month, the social networking giant has made the app available in 40 more countries, including India. Unfortunately, a detailed list of countries where the app is available has not been disclosed by the company yet.

The Facebook Mentions app (only for iOS) is meant only for celebrities and public figures with verified Pages. Facebook plans to make it available for verified Profiles in the future.The app is now available at the App Store.

Notably, Facebook Mentions is another product from the company's Creative Labs, which claims the app "makes it easy for public figures to talk with their fans and each other on the go."

The first Facebook Creative Labs product was the news reader, the Paper app. The official listing of the app defines it as, "Mentions is a new way for actors, athletes, musicians and other influencers to discover and join conversations on Facebook."

According to the Facebook Mentions listing page on the App Store, public figures can use the app in several ways.

See what fans are saying - Start a conversation with people and influencers who are talking about you.

Tell your story - Share updates, photos and videos and host live Q&As directly from your phone.

Join popular conversations - Discover what's trending and add your voice to the story.

The social network giant when launching the Facebook Mentions app in the US last month made the announcement via its dedicated newsroom site, and said, "Nearly 800 million people are connected to public figures on Facebook, and interacting with athletes, musicians, actors and other influencers is an important part of their experience. From cheering on World Cup players to checking out updates from favourite celebrities, there are more than a billion interactions between public figures and their fans on Facebook every week. We want to make these interactions even better. Today, we're introducing Facebook Mentions, a new Facebook Creative Labs app that makes it easy for public figures to talk with their fans and each other on the go."

The company notes that an admin of verified Page can request access to Mentions directly.