Facebook says it had to remove the mini games feature after the Gaming app was rejected several times in the recent months. 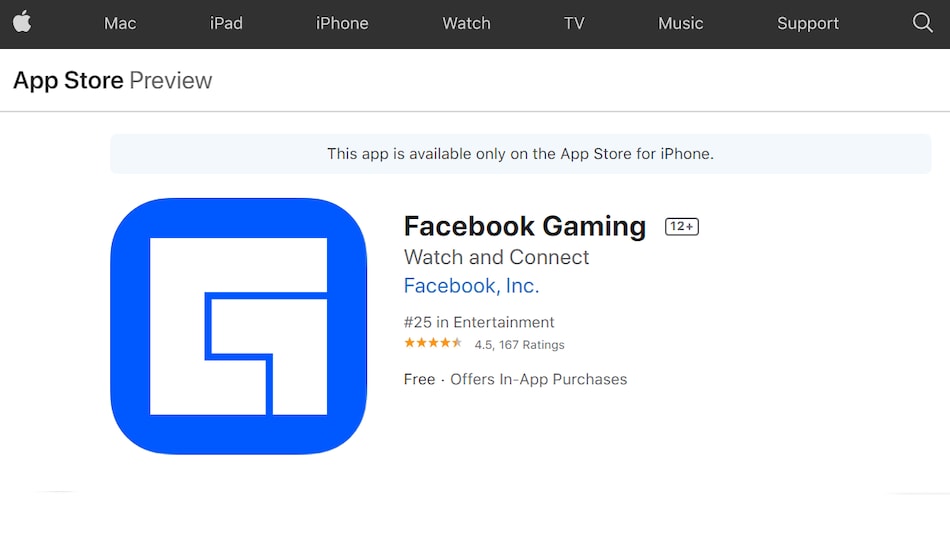 Facebook Gaming app, a dedicated platform for watching livestreams of games, was launched in April to take on competitors like Twitch. This app was made available for Android users initially, and after months of review, it was finally launched on Friday for iOS users. While the Facebook Gaming app is live on the App Store, it comes without a key feature that is available for Android users - mini games. Criticising Apple's App Store approval process, Facebook says that it had to take this call after the Gaming app was rejected several times in recent months.

Facebook tried to get Apple's approval several times before removing the mini games feature entirely from Facebook Gaming iOS app. It even challenged the App Store guidelines in a new appeal process that Apple introduced last year for developers whose apps get rejected multiple times. However, after that method also failed, the Gaming app was launched on iOS without Facebook's Instant Games platform. Facebook's chief operating officer Sheryl Sandberg told The Verge, "Unfortunately, we had to remove gameplay functionality entirely in order to get Apple's approval on the standalone Facebook Gaming app — meaning iOS users have an inferior experience to those using Android. We're staying focused on building communities for more than 380 million people who play games on Facebook every month — whether Apple allows it in a standalone app or not.”

Apple justifies its rejection by claiming that Facebook Gaming app violates App Store guidelines. It asserts that the primary purpose of Facebook Gaming is to play games, while Facebook maintains that 95 percent of activity on the app is watching streams. “Our customers enjoy great apps and games from millions of developers, and gaming services can absolutely launch on the App Store as long as they follow the same set of guidelines applicable to all developers, including submitting games individually for review, and appearing in charts and search,” an Apple spokesperson told the publication.

Facebook Gaming Chief Vivek Sharma also was also quoted to say that the company had to make several compromises in the past due to this stringent Apple App Store rules. “Even on the main Facebook app and Messenger, we've been forced to bury Instant Games for years on iOS. This is shared pain across the games industry, which ultimately hurts players and devs and severely hamstrings innovation on mobile for other types of formats, like cloud gaming.”

This comes just days after Microsoft ended its xCloud testing on iOS platforms. The company did not cite an exact reason for this, but the heavily criticised Apple Store policies for cloud gaming might be why Microsoft stopped iOS testing completely. Apple was quick to offer its reasoning, claiming that it "can't review every game offered by these services." The Cupertino giant clarifies that it will allow games to thrive on iOS platforms, as long as games are submitted individually for review, and meet other App Store guidelines.