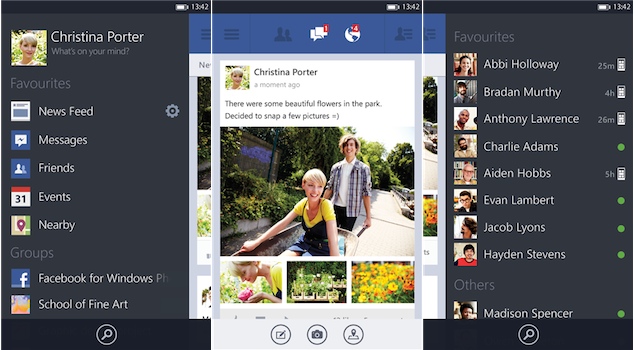 The Facebook app for Windows Phone 8 has received a major upgrade overhauling the user interface and offering support for high-resolution pictures, post sharing, Facebook Timeline view, among other features.

At the time of writing this post, the updated app is not available to Windows Phone 7.x users, however, Microsoft says that it is also working to update the Windows Phone 7 version of the app later in the summer.

The app is now much more in-sync with Facebook apps on other platforms, though it's still built by Microsoft. It now sports a drawer menu at the left offering access to the user's News Feed, Messages, Nearby places for checking-in, Events and Friends in addition to Pages, Groups, Apps and Settings. The top Blue bar features the familiar Friend request, Messages and Notification buttons and there's another drawer that brings up the Messages list at the right displaying Favourites and available contacts.

The App features three shortcut buttons for posting your status, posting a photo and checking-in at a location. You can't share the new 'What you're doing' and 'What you're feeling' activities with your status updates at the moment though.

The new Facebook app has already been available as a separate beta app along with the old Facebook app but the two were unified just a few hours back. However, the Facebook for Windows Phone 8 beta app is still available separately and will offer new features before they're included in the stable Facebook app for interested users to give their feedback.

Microsoft had earlier announced the Facebook for Windows Phone Beta app program through which it had introduced a Beta app that doesn't appear in Windows Phone Store searches but is open to everyone. The app, that can co-exist with the current stable release of the Facebook app, allows volunteers to try the app and report bugs.
Comments