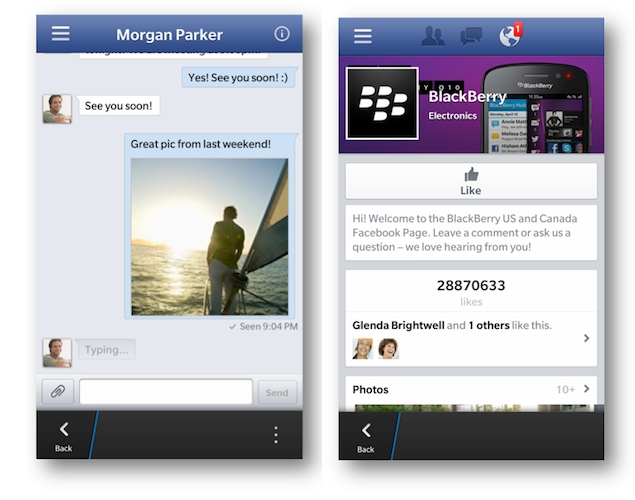 The chat feature was previously missing from the Facebook for BlackBerry app, while it was available on other platforms including on Android and iOS. According to a blog post by BlackBerry, the new update (version 10.2.1) allows users to see the online status of their friends,  start a chat message, send photos in chat messages, and see when messages are delivered and read. Users will also be able to see when a friend is typing a message, search within their chat list to find friends and groups, and edit list of their favourite chat friends.

The updated app also brings quicker Scrolling in Newsfeed and the ability to scroll to the top of the newsfeed by clicking on the sidebar.

Facebook 10.2.1 also offers allows users to set their Facebook profile photo or cover photo from the phone's Camera app, or from within a Facebook photo album. Users will now be able to see how many of their friends have liked a page and how many people in total have liked a page.

It also brings enhanced Page Admin functions, allowing users to post updates, see the number of people talking about a page, view the number of likes a page has and see how many people checked in at a venue page. The app also offers an updated look and feel to Pages.

BlackBerry also notes that the app still has some bugs due to which items in the News Feed might appear out of order or don't appear to load on your News Feed screen in some cases. Users may also receive an error message when attempting to post a comment on a photo on the News Feed screen, in some situations. It said it was aware of the issues and was 'working diligently with Facebook to improve the experience on BlackBerry smartphones.'

It's worth pointing out that the app has been developed by BlackBerry and not by Facebook.
Comments

Lenovo launches A1000, A3000 and S6000 Android tablets in India
BSNL estimates it needs Rs. 40,000 crore over next five years to become profitable