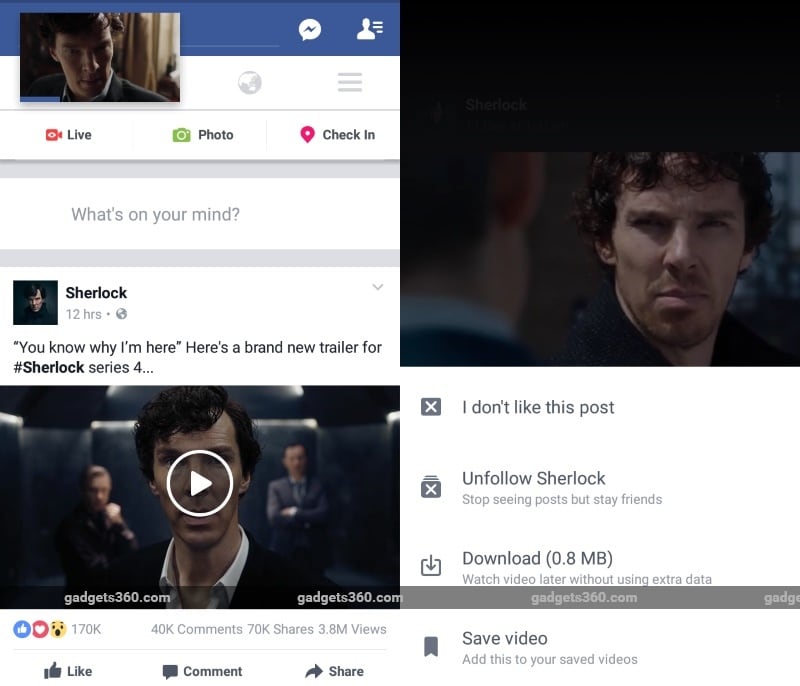 Facebook appears keen on making several changes to its apps, and while some features are seeing a broad rollout, others are evidently in testing. Over the past few weeks, reports of several changes are coming. The biggest of these is the option to upload videos in HD on the Android app - a feature that has been present on the iOS app for nearly two years. Another feature being seen on both the Android app and iOS apps is the ability to watch floating videos. Next up, is the ability to choose video playback quality on the Android app, a new interface to browse notifications, as well as the ability to save videos offline for later viewing. Lastly, now coming to the desktop, Facebook appears to be testing a chat-like interface for comments on your own posts.

Let's start with the option to upload videos in HD quality. This feature has been present on iOS for a long time, and is a welcome addition to the Android app. While some users are seeing this change on the general release of the Android app, others can only see it on the beta channel. A broader rollout can be expected soon. You can go to Settings > Upload Videos in HD to turn the feature on.

The videos playback on the Facebook app has always been wanting until Friday when we started seeing a toggle while playing videos on Facebook beta app for Android. If you're a Facebook beta tester, clicking on the toggle in the app will enable the picture-in-picture video playback that will run even outside the app. The video will keep playing in a floating widget while you can scroll through your News Feed and browse the Facebook app, when you're inside it. In order to let the floating video widget run outside the app, you may need to update the 'Draw over other apps' permission in the Android setting, similar to how chat heads work with Facebook Messenger. In our testing, we also found this floating video widget to be available in the Facebook's iOS app as well, which suggests this feature might still be under testing for iOS users. Unsurprisingly, the video floating widget on iOS only works inside the Facebook app.

Next up, is the ability to select specific video quality on the Android, just like YouTube, Android Police reports. However, while testing we did not find the video quality control in the app

In addition to that, you can now actually save videos offline for later viewing sans Internet connectivity, competing with the likes of YouTube's offline video and the recently-pushed Netflix's save offline feature. We'd like to mention that earlier 'Save video' meant bookmarking the video so that you can watch it later using Internet. The offline video will still be listed in the 'Saved' tab of the app. This feature is available for the Facebook for Android users on both the regular app and the beta app.

Coming to Facebook's desktop version, Facebook is testing a new pop-up interface for comments, making them look like a chat. This way, users can answer comments on their posts, replies to their comments, or posts and comments they've been tagged in, without stopping what they are doing on the rest of the social network. Speaking to TechCrunch, a Facebook spokesperson has confirmed this feature, In Facebook's words, "We've heard from people that they would like an easier way to participate in conversations on a post while they are still in News Feed so we are testing a new option that opens up a window when someone comments on your post, replies to your comment or tags you in a comment. You can always hide the conversation or turn off notifications from within the dropdown menu of the post."