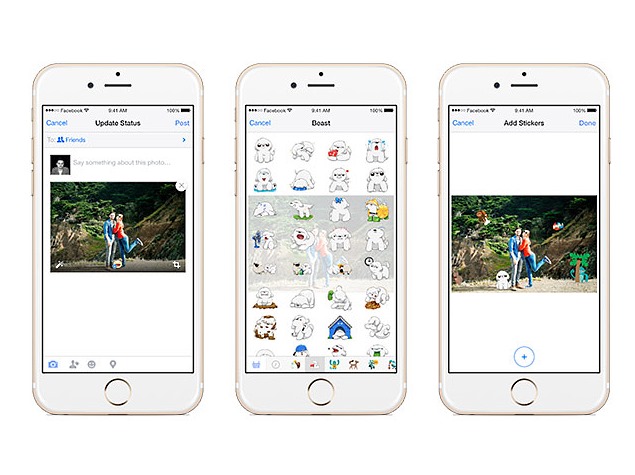 Facebook on Thursday started updating its Android and iOS apps with an interesting new mobile feature that lets users add stickers over photos before they are uploaded.

With the updated Facebook apps (not yet in India), users will now see a new sticker icon while uploading photos to Facebook from (Android and iOS) apps, as first noted by Engadget.

Once the sticker (or multiple stickers) is added, its size can be changed, they can be rotated or dragged for placement over the photo. Of course, it can be deleted before the photo is finally uploaded.

(Also see: Facebook's Internet.org Comes to India: Everything You Need to Know)

The Stickered for Messenger app lets users super-impose Facebook Messenger stickers onto their photos. The app includes 52 categories of emoticons, and similar to the new feature, users can drag, pinch, stretch and rotate stickers on the clicked image.

Users can also add captions, and even apply stickers before the shot is taken with the app's built-in camera. Users can decorate images already present in their gallery as well, and there is no limit to how many stickers can be applied in one image.

The Stickered for Messenger app, besides a Facebook 'Like' button sticker, additionally features a much needed and asked for 'Dislike' sticker with a thumbs-down.