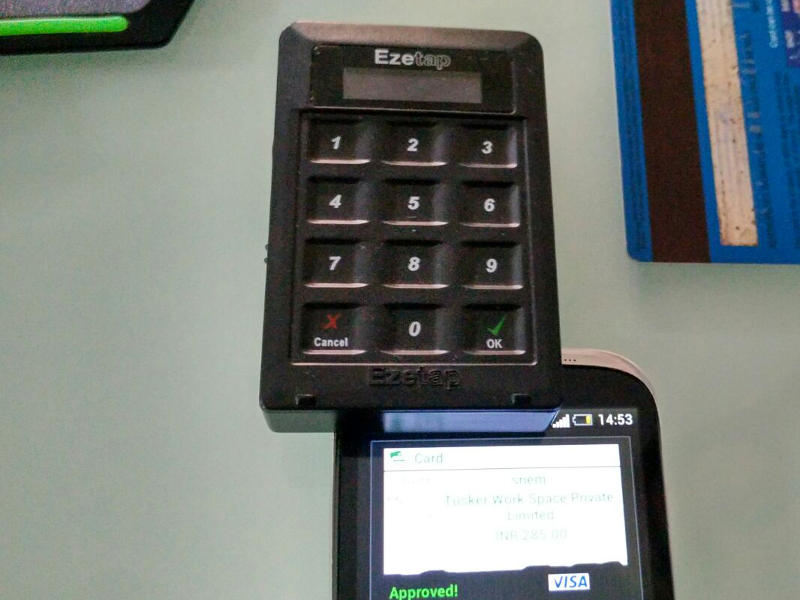 Bengaluru-based Ezetap, a Square-like smartphone-based payments device, announced that it has added universal acceptance of mobile wallets for its merchants base on Thursday. Ezetap has tied up with four Indian mobile wallet players - Paytm, MobiKwik, Novopay, and FreeCharge.

Abhijit Bose, CEO and Co-Founder, Ezetap referred to the development as a fundamental change in how the payments industry works. "We're trying to focus on digital electronic transaction adoption. That's the big mega picture that everybody is working on. The government is working on it," he said, referring to National Payments Corporation of India's rollout of its Unified Payments Interface, which brings interoperability from different bank accounts and wallets.

He referred to Nandan Nilenkani's talk which he called it a WhatsApp moment for financial services, based on the dissemination of smart connected mobile devices to consumers and to merchants. Collectively, they allowing internet based companies to disrupt and transform industries, and unlock untapped markets, he said.

"What nobody has solved at scale yet, is the third leg of the stool which is merchants. If you can only book an Uber cab or buy something in your own app, it's not going to become mainstream. What you need large scale mass adoption, from tier 1 Bengaluru down to tier 4 villages of every sector. Only when you do that, do you have digital economy," Bose said.

"Until this launch, nobody had a single solution that was interoperable and supported every form of digital payment in this country," Bose said, adding that mobile wallets can focus on on the consumer side, while Ezetap focuses on the merchant side of the equation.

Ezetap's card reader, priced at $50, needs an Internet-enabled smartphone to accept payments. Bose said that it works on a basic 2G network, and that the wallets don't add an extra cost on Ezetap merchants. The standard monthly package costs Rs. 150 a month, for the basic mPOS goes up with premium services. Banks can choose to provide their own rates bases on their merchant relationship, the company said.

"The combination of the terminal and the EZ tap application allows the merchant to take credit card, debit card payments, and now wallets. And it also links to our server in the cloud, so we can enable any kind of transaction anywhere," Bose said, adding that more wallet integration announcements were coming in the next few weeks and months.

Ezetap currently works with Android and Windows Phone smartphones, and is coming out with an iOS version soon.

Live for the last 24 months, Ezetap has deployed over 70,000 service points, Bose said. SBI, HDFC, Citibank, and American Express, an investor presently deploy EZtap's mPOS solution, while Amazon, Bajaj Allianz, Airtel and BigBasket are some of their biggest customers, Bose said, adding that over 20,000 small merchants currently use its service.

Ezetap had raised raised $25 million (roughly Rs. 161 crores) in its Series C round in August.