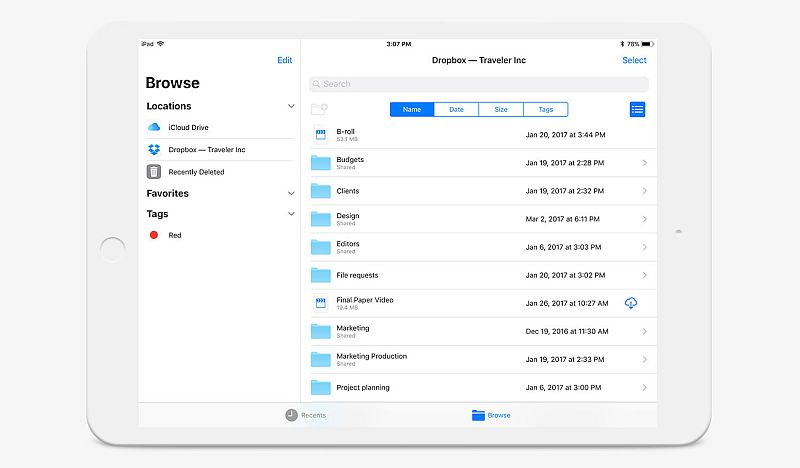 Dropbox has released an update to its iOS app supporting the new Files app, which is a core part of iOS 11. For iOS 11 users, the new Files app lets users browse files stored on the device and on Dropbox - all in one place.

Users can open, edit, move, rename, upload, create folders, and download files stored in Dropbox right from the Files app. With the new support, Dropbox users will be able to use the iOS 11 Files app to browse both personal and work accounts. The Dropbox update with iOS 11 Files app integration means that files stored in Dropbox account can be accessed from supported third-party apps.

The updated Dropbox app is now available to download via App Store. The 'What's New' section in store notes, "Easier access to Dropbox: Once you upgrade to iOS 11, you can access your Dropbox files from the new Files app and supported third-party apps. No need to flip back and forth between apps."

"Connecting your Dropbox account to Files extends beyond the app itself. This new integration also makes your Dropbox files available across the entire operating system. You'll now be able to access files stored in your Dropbox account from supported third-party apps. So instead of jumping back and forth between apps, changes to Dropbox files opened in another app will automatically sync to your account," said Ross Piper of Dropbox in a blog post.

With iOS 11, the iCloud Drive app was replaced by Files app, where all of your files are at one place including files from cloud storage apps such as Dropbox, and from other apps that include documents such as PDF Expert 6, and even files on your local device. The new Files app in iOS 11 is a file management app that can manage all files in one place and it works on both iPhone and iPad.