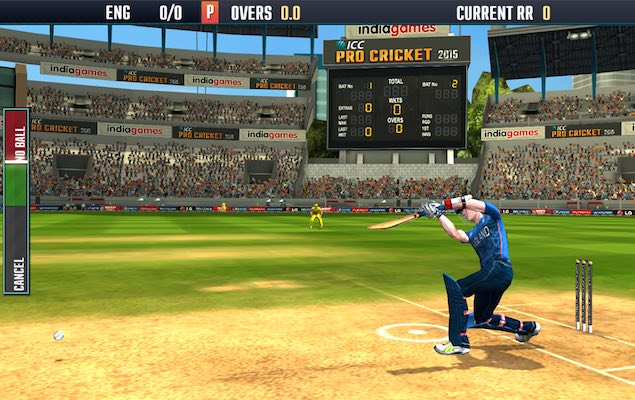 The ICC Cricket World Cup is a mere seven days away and we fully expect mobile, PC, and even consoles to see their fair share of cricket games over the next few days. While Australian studio Big Ant's Don Bradman Cricket is scheduled to launch next week, a day before the World Cup kicks off, Disney India announced ICC Pro Cricket 2015 on Friday for iOS, Android, Mobile, DTH, and PC.

The game is developed by Indiagames, a company that Disney acquired in 2013, and one that has a track record of successful cricket games in the past, such as Cricket Fever Challenge, World Cup Cricket Fever, and Cricket T20 Fever.

"We are set out to build cricket as a franchise in the world of gaming. Our latest offering -- ICC Pro Cricket 2015, a real cricket simulation game with high quality gameplay and superior visual experience to our global audiences is just the beginning of our journey. This will be the best in cricket games, bringing our consumers as close to a real on-ground cricket experience as possible, thus elevating the overall gameplay. We hope cricket lovers enjoy playing this game as much as they enjoy the ICC Cricket World Cup," said Sameer Ganapathy, Vice President and Head, Interactive - Disney India.

Disney has said that ICC Pro Cricket 2015 will be available closer to the World Cup on PCs and mobile phones (on iOS and Android) across India, Australia and other select international markets and on the DTH platforms. When it is available, however, PC users can download the game from the official website for a flat cost of $9.99 (around Rs. 619), while DTH players can access this game via Dish TV and Airtel. For smartphones, Disney has opted for the freemium model for the iOS and Android versions of the app.