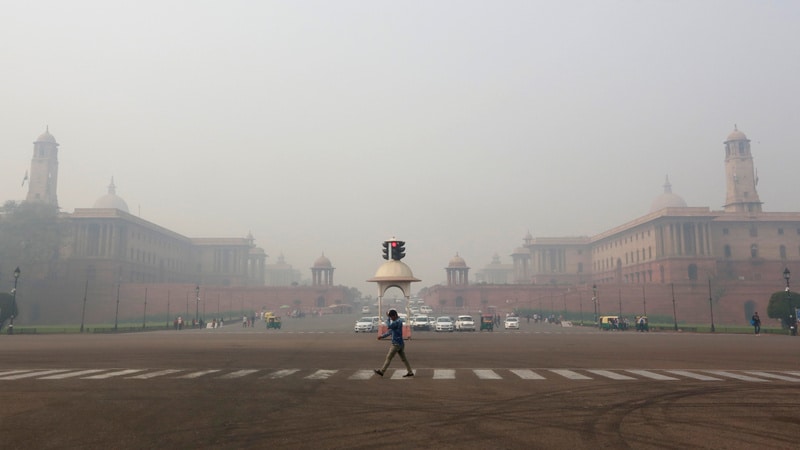 Three students of Bharti Vidyapeeth College of Engineering in Delhi developed an Android app to measure the alarming pollution levels in the National Capital Region (NCR), the US-based Marconi Society, which awarded them with a prize, said on Monday.

"The three students of Bharti Vidyapeeth have developed the application using smartphone camera images to measure the Air Quality Index (AQI) in the NCR, especially New Delhi, by anyone with a smartphone device," said the Society in an e-mail to IANS here.

The under-graduate engineering students are Tanmay Srivastava, Kanishk Jeet and Prerna Khanna, who jointly won the cash prize of $1500 (Rs 1,09,500) last week in a contest, organised in India and sponsored by the Society under its Celestini Programme.

The NCR, especially Delhi has been in the grip of toxic air for a week, mainly due to thick smoke emanating from the burning of stubble in the farmlands of Haryana and Punjab and lakhs of automobiles emitting fossil fumes.

"The three have developed 'Air Cognizer', a portable, real-time air quality analytics application, which is available at Google Play Store to download freely by any smartphone user to measure the air quality in his/her area," said the Society.

"The user has to upload an image taken outdoor with half of it (image) covering the sky region. Using image processing techniques, features are extracted and the Machine Learning (ML) model of the app estimates the AQI in the area," said the statement.

"You can't know how to counter an issue unless you know the severity of it. Hence, we created Air Cognizer to make residents know the quality of air they breathe, which is just a click away," Srivastava told IANS from New Delhi.

Set up in 1974 in honour of the 1909 Nobel Laureate Guglielmo Marconi (1874-1937), who invented the radio, the California-headquartered Marconi Society promotes awareness of key technology and policy issues in telecom and internet and recognises individual achievements through the Marconi Prize and Young Scholar Awards every year.

The Celestini Programme, named after the hill in Italy where Marconi conducted his first wireless transmission experiments, is run by the Society's annual Young Scholar Awards, who work with engineering under-graduate students in developing countries, to use technology for social and economic transformation of their communities.

The Programme was started in India in 2017 in partnership with the Indian Institute of Technology (IIT-Delhi) by Google AI's ML engineer Aakanksha Chowdhery, who was a Marconi Young Scholar in 2012 for her work in the high-speed last mile internet connectivity.

The IIT-Delhi partners include its professors Brejesh Lall and Prerana Mukherjee.

Three teams from 100 applicants were selected to work during the summer at IIT-Delhi on problems related to air pollution and road safety in the national capital.

Divyam Madaan and Radhika Dua of the Chandigarh-based University Institute of Engineering and Technology (UIET) won the second prize for designing a website that forecasts air pollution levels in Delhi over the next 24 hours.

The website, using Google Cloud platform and ML engine, predicts the major pollutant and its causes such as vehicular traffic, industry emissions or agricultural waste in every location based on historical data.